Earlier this month, Apple updated its App Store review guidelines to allow for "approved" virtual currencies in apps. Now, Coindesk (via The Next Web) reports that Bitcoin wallet app Coin Pocket has launched in the App Store, becoming the first app on iOS that allows users to send and receive the virtual currency. 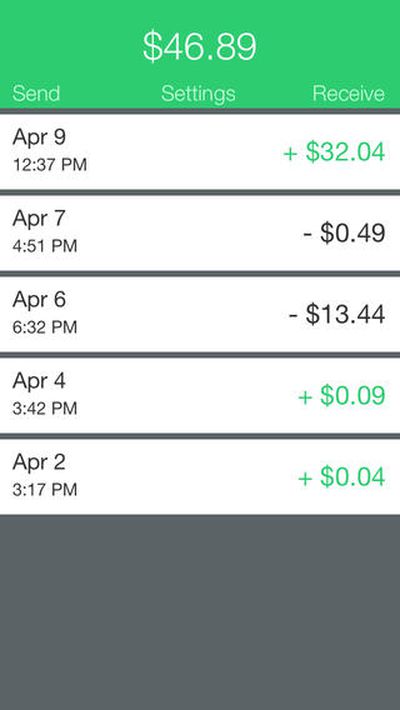 Bitcoin wallet app Coin Pocket
In addition to Coin Pocket, gift card purchasing app eGifter has also received an update to now accept Bitcoin as a form of payment. Earlier this month, betting app Betcoin also appeared on the App Store with in-app Bitcoin spending capabilities. Its developer, Omri Cohen, noted that the app was an experiment to test what Apple would allow ahead of the policy change on virtual currencies in apps.

Prior to its policy change, Apple displayed past tendencies to remove and deny apps that promoted virtual currencies, notably asking the developers behind private messaging app Gliph to remove the app's Bitcoin sending capabilities. With the launch of Coin Pocket however, it is now likely that users will be seeing many more Bitcoin-related apps in the App Store provided they follow Apple's guidelines.

The state of Bitcoin and its acceptance has changed quite quickly. :D

Which is strange, considering what happened with Mt. Gox.
Unless you're a drug dealer or something, I don't get it.
Score: 8 Votes (Like | Disagree)

Bitcoin is the way of the future, so I'm glad they changed their mind about accepting it. Not gonna lie, it was definitely pretty sketch starting out though :D


Some kind of virtual currencie(s) are the way of the future... not so sure about Bitcoin! Its ultimate importance will be historical I expect. It will pave the way. (And it's wasteful of power, too--an interesting but not elegant long-term solution.)
Score: 7 Votes (Like | Disagree)

Di4mondz
Finally, there's an app for that.
Score: 7 Votes (Like | Disagree)

If you've got a bank account, your wealth is already stored in a virtual wallet; an encrypted mass of ones and zeros. Physical money is just paper that at any time could become completely worthless -- it's all a matter of perspective.


Except that real money in a real bank or credit union is insured. If the bank burns down, the system is hacked and obliterated, or somebody grabs the cash and flees to some other country, there is FDIC or its equivalent to restore your accounts, put the cash back, and make it all right. Bitcoin? Nope. Your Bitcoin house folds and you're SOL.

Bitcoin is not actually a currency, it is a commodity. The argument that it's just as secure, or insecure, as the Dollar or Pound or Yen is specious. While there may be some question as to the stability of real currencies, there is a country to back them. A government, tax revenue, and GDP. Even the Zimbabwean currency is worth something. Bitcoin is just a number. It is worth nothing whatsoever except for the imaginary value investors put on it. There is nothing to back it up.

Nope, I don't do Bitcoin. It shows every sign of being another pyramid scheme that is going to collapse. There's nothing supporting Bitcoin except for hope and naiveté.
Score: 5 Votes (Like | Disagree)

Z400Racer37
YES!!!!!!!! Steve, I swear I will never have impure thoughts of switching to Android again. :D
Score: 5 Votes (Like | Disagree)
Read All Comments