Tuesday May 20, 2014 1:34 pm PDT by Juli Clover
iWork for iCloud received an update today, adding a range of new features to Pages, Keynote, and Numbers, further boosting the real-time collaboration capabilities of the apps. It is now possible to collaborate with up to 100 people (previous limit was 50) on a single document and users are also able to create 2D and interactive charts in all three apps.

Larger documents, up to 1GB in size, can be edited, and larger images up to 10MB in size can be added to documents. Chart formatting is now available in all three apps, and there are new color options. 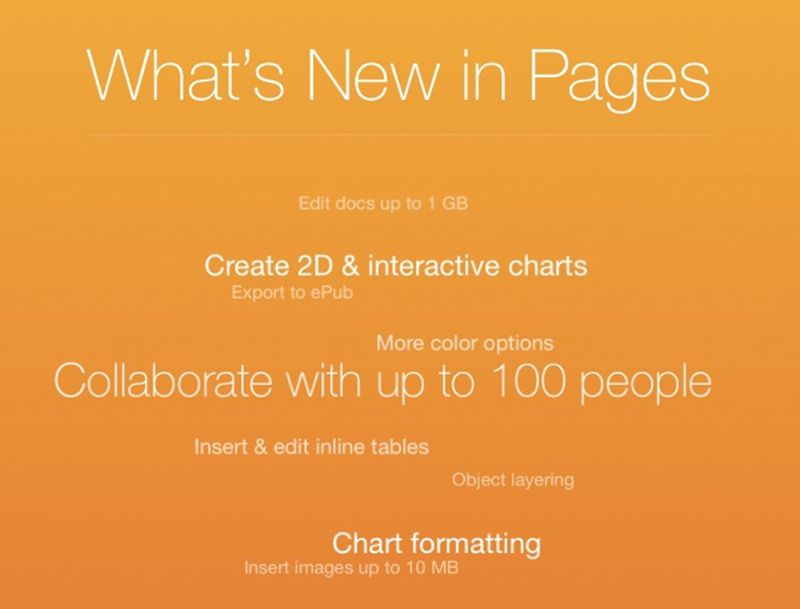 Keynote has also gained the ability to show and hide slide numbers, while Numbers now supports alternating row colors in tables and the ability to export to CSV. Pages supports exporting to ePub, object layering, and inserting and editing inline tables.

The iWork for iCloud software is available to all users for free, and it can be accessed through Apple's iCloud.com website.

The Doctor11
I edit documents with 100 people all the time :rolleyes:
Rating: 12 Votes

juancarlosh
It is a lost race. iWork for iCloud and for iOS are not only slowing but greatly limiting the capabilities of iWork for the Mac. It is sad.

Yes. Where have you been?
Rating: 9 Votes

I still don't understand why I'd want to use a web version of iWork over a native version for the Mac or iOS.


I can think of three reasons:
1) You're not on a Mac or iOS device
2) You are on someone else's Mac without iWork installed
3) Real-time collaboration
Rating: 8 Votes

How about some more total storage space for iCloud? I pay $40/yr for 20GB just so I can backup my iPad and iPhone. For the free tier, you should at least get 5GB per device so you don't have to have different iCloud accounts for each device.


I would suspect that Apple will announce more details about iCloud a few weeks from now at the WWDC keynote.


Yes, millions use iCloud and thousands of apps provide it by default.

I tried it, and it just didn't impress me. There was nothing to it that OneDrive or GoogleDrive didn't have. And there's plenty that those two have that iCloud doesn't.


That's because iCloud isn't trying to be like them right now. iCloud has a few services under its banner (iCloud Data and Documents, iCloud email, etc).

For many people, iCloud provides a seamless experience for syncing their data between iOS and OS X apps. There is no account management, no signing in or anything like that needed like OneDrive or Dropbox on OS X/iOS.

In fact, OneDrive is much deeply integrated on Windows and Windows Phone, so it is a better service there but for OS X/iOS users, iCloud is a better fit.

I'd suspect Apple will expand the iCloud to include iDisk-ish type of sync in the future.

I still don't understand why I'd want to use a web version of iWork over a native version for the Mac or iOS.


OS X isn't that big of a market, it's useful for sharing and working with folks on Windows, Android, and other platforms they may be on.

Not to mention, you might not always be on your Mac and/or IOS devices, it would be nice to grab it on the web site.

True, it may be better to use Google Docs or Microsoft Office Web. We'll just have to see where iCloud takes us in the next few years.

There's nothing iCloud does that's special and a lot of things it doesn't do.


It's completely integrated with OS X and iOS. I open an app on my Mac, it detected the data from my iOS app without me having to do anything special like pointing it to a data file in a certain folder nor installing a third party service to manage the data.

I have no use for Dropbox but I do use a few apps like 1Password, I rather not install Dropbox/OneDrive just for those apps.
Rating: 6 Votes

More often than you'd think, it's an amazing service.


Apparently 'amazing' doesn't mean what it once did.
Rating: 6 Votes

macduke
How about some more total storage space for iCloud? I pay $40/yr for 20GB just so I can backup my iPad and iPhone. For the free tier, you should at least get 5GB per device so you don't have to have different iCloud accounts for each device.
Rating: 6 Votes