Apple yesterday released OS X 10.9.3 with support for 4K displays, contact and calendar syncing improvements, and more. Many (but not all) users are, however, experiencing a bug in the update that hides the /Users folder.

The /Users folder is a top-level folder that contains the home folder and personal files for each user on a Mac. It's not clear why only some OS X users lose access to the /Users folder, but the inability to browse this folder could be problematic for some Mac owners affected by the glitch.

A range of solutions for the bug have been suggested with varying degrees of complexity, with perhaps the simplest noted by Kirk McElhearn and Chris Breen of Macworld:

Launch Terminal (/Applications/Utilities), enter "sudo chflags nohidden /Users", and press the Return key. You’ll be prompted for your user password. Enter it, press Return again, and the Users folder will be visible as it once was.

This solution is not, however, a permanent one, as the issue will reappear if the machine is restarted and the fix will need to be applied again.

Breen goes on to outline a more permanent solution that involves creating an AppleScript for running the Terminal command and saving it as an application to run at login. 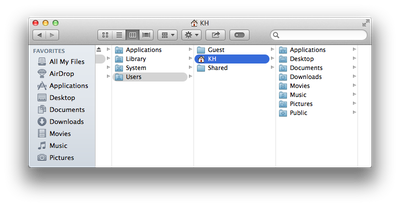 Another recommendation comes from The Loop's Dave Mark, who suggests creating an alias for the folder that will remain accessible even with the folder itself hidden.

For a more permanent solution, [after manually navigating to the hidden folder] control-click on the /Users folder and select Make Alias from the contextual menu that appears. Though the /Users folder will become hidden again when you close your Finder window, the alias will stick around.

For many users, the bug will not have a significant impact on their Mac usage, as they can still access their own home folders through shortcuts in the Finder sidebar. Consequently, some users who are not inconvenienced by the bug may prefer to simply wait for Apple to address it in a future update.

Update 10:30 AM PT: As noted by MacObserver, the issue may be caused by a combination of iTunes 11.2 and Find My Mac rather than OS X 10.9.3. The site tested each update released yesterday and found the /Users and /Users/Shared folders only disappeared after iTunes 11.2 was installed on a Mac with Find My Mac enabled.

mojolicious
It would be nice to hear something from Apple, would it not?
Score: 8 Votes (Like | Disagree)

HD on the desktop.
Wow. That's really old-school. Virtually pointless at this point. Very easy to get to in any case. Anybody who would ever have actual need to access it, would know how to do it in less than 1 second. Meanwhile, it's kept out of way of less knowledgable users who could muck it up.
(same with Library)


I bow in the shadow of your obvious superiority. You are so awesome. I wish I could be like you.
Score: 6 Votes (Like | Disagree)


It's a list of directories, subdirectories, and files on a computer. It's not supposed to be pretty, princess.
Score: 5 Votes (Like | Disagree)

I suspect (hope) some utility developer such as Onyx, Cocktail, TinkerTool, MacPilot, etc., will soon have a setting/preference to (re)enable the showing of one's Users Folder (to include the proper Permissions so that it is available after restart). Or, perhaps a small freeware app/script...

Or is that just wishful thinking?


It's a bug! They're not intentionally hiding the Users folder, why would they do that but keep the System folder unhidden? Use some basic logic people.
Score: 5 Votes (Like | Disagree)

Nunyabinez
One suggestion is that people were deleting the folder and borking their machine, so Apple was hiding it to prevent that. However, I find that highly unlikely. I think it is some strange glitch. There are many reasons to have that folder visible.

However, I am always baffled at how Macs are configured out of the box. I always spend the first few minutes on a new machine putting an alias of the documents folder, apps folder, downloads folder and utilities folder on the dock so that I can get to stuff quickly. And I always show my HD on the desktop. The standard setup makes me feel like they don't want me to get to anything.

One thing I have noticed is how much variety there is among Mac users in how they access various things. I always think my way is the only way and then I get on someone else's Mac and things are all different, but it works for them.
Score: 5 Votes (Like | Disagree)
Read All Comments