Apple today updated its professional audio software Logic Pro X to version 10.0.7, adding support for 24 processing threads on 12-core Mac Pro models along with several new features to enhance the functionality of the app and an array of bug fixes. 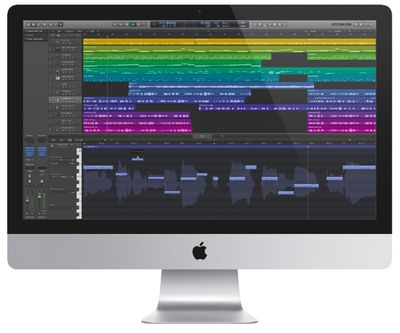 - Now supports 24 processing threads on 12-core Mac Pro models
- The current volume, pan, and send values for all selected tracks can now be inserted at the playhead position
- Enabling Low Latency Mode no longer creates sync issues for Drummer, Ultrabeat, Native Instruments Machine and other plug-ins with integrated step sequencers
- Automation can now be copied and pasted to any location using the Marquee tool
- Adds an option for MIDI volume and pan data to control the instrument plug-in instead of the channel strip
- Resolves several snap and alignment guide issues
- Various fixes that improve XML import and export with Final Cut Pro X
- Contains multiple enhancements to Accessibility

I personally don't understand the idea of using 12 cores for Logic (or any music software), but I suppose it's not for me.

12 cores is overkill for the sessions I'm working on.

Kind of... its true that you need CPU cycles to deal with I/O, but unless you're running input effects (i can't imagine why) then the input buffer size is more constrained by how your machine is sized for I/O - what your RAM and disk throughput looks like.


If by "Input effects" you mean "effects processing for live guitars, vocals, etc." thenwell, hopefully that answers your question.

No-one who is a serious user of audio production applications has any question about the benefits of greater CPU power. As CPU power increases, we are asking more of our plug-ins in terms of both functionality and fidelity. I don't see that slowing down any time soon.
Score: 6 Votes (Like | Disagree)

Regardless of whether you print the effects or not, it's useful to be able to hear them when recording - amps and delays when recording guitars, for instance, or reverb when recording vocals. The low latencies required to do this comfortably (64 or 128 samples) cause an increased load on the CPU, and mean that variations in processing load aren't averaged out as much as they are with longer latencies, increasing the probability of CPU overs.


I'll often be in a situation where a track is 90% done, using Ozone, BFD, Ivory, etc. all playing back fine on a 1024 buffer. Then I decide I need to re-record or add a guitar part. I set the buffer down to 128 to do this and the Mac doesn't have the power to play the project at this setting.

People commenting that faster/more core CPUs aren't needed for audio don't know what they're talking about. Freezing tracks to reduce CPU is a PITA.
Score: 4 Votes (Like | Disagree)

Aluminum213
I just bought a pair of Beats headphones so now I can make some chart topping hits
Score: 4 Votes (Like | Disagree)
Read All Comments