The Important Differences Between Real and Counterfeit iPad Chargers

One of the side effects of the tremendous popularity of iPhones and iPads has been the counterfeit Apple product market, which looks to lure in consumers who want to purchase items like chargers for less money than Apple's official offerings. 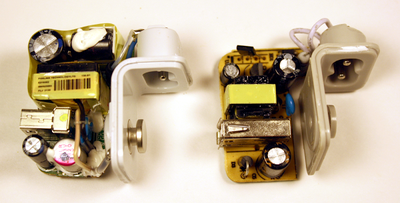 Apple's official iPad charger (left) vs counterfeit (right).
He compared the differences between Apple's real $19 iPad charger and a $3 he found on eBay. While they look exactly the same on the outside, he found major differences on the inside. Apple's charger is crammed full of bigger, higher quality components while the counterfeit has low-quality components and more space. Another difference was a safety measure:


One safety difference is obvious: the Apple charger has much more insulation. The upper (high-voltage) half is wrapped in yellow insulating tape. Some components are encased in shrink tubing, there are plastic insulators between some components, and some wires have extra insulation. The counterfeit charger only has minimal insulation.

Flipping the boards over reveals another obvious safety difference: Apple's charger includes red insulating tape while the counterfeit does not. One not-so-obvious difference is the space between high and low voltage currents running through the boards. While Apple's charger includes a safe 4mm separation between the two, the counterfeit only features a 0.6mm separation. Shirriff notes this means a simple drop of condensation could cause the charger to zap the user.

Another key difference is the power output. Apple's charger outputs 10W at a steady rate while the counterfeit outputs 5.9W with frequent spikes, which means that Apple's charger charges the iPad quicker with a higher quality of energy.

Shirriff goes into far greater detail with extensive images and graphs detailing the specific differences between Apple's real iPad charger and the counterfeit. The full comparison is available on his blog. Users who believe they have a counterfeit charger may take part in Apple's third-party charger takeback program.

While they look exactly the same on the outside, he found major differences on the inside.

ChrisA
I've actually done design work on power supplies. The hard part is not simply designing something that works but one that remains safe AFTER a major component failure. You you ask "does the unit remain safe AFTER a short inside the transformers. If a capacitor blows and bits of metal are scattered around does the unit remain safe. The trouble is that there are about a b-zillion ways things can break and you can't think of them all so you use general purpose "backups" like wrapping the higher voltage part in tape. This is a "backup" and costs money but contributes ZERO visible features. It's the same with the gap on the circuit board. board manufactures charge by the square inch, so gaps cost money can add no visible features. The better design will have two or three backups and will remain safe even after a major component failure but people don't like paying for this

My bet is that if air bags and seat belts were an optional higher priced option on cars, many people would not spend the money. Same with power supplies consumers mostly buy based on price.
Score: 9 Votes (Like | Disagree)

Having gone through 2 ipad chargers and 3 Macbook chargers in the last couple of years (all failing at the device connector end) I'm sure Apple could kill the counterfeit market simply by stopping theirs from breaking on a regular basis. The guy in our local apple shop even recommends to people that they wrap a spring out of a pen around the end to give it more support!


What did the chargers ever do to you? Why do you need to abuse them? From my experience, Apple chargers take a lot to break.
Score: 4 Votes (Like | Disagree)


If you go to his blog, you'll see both of the chargers in their cases side by side. They do look exactly the same.
I think the brown stuff is merely the innercase.
Score: 4 Votes (Like | Disagree)

haruhiko
I never bought any counterfeit power supply since it is THE most vital component of all electronic devices - the energy source! Poor power supplies can kill your devices or even yourself.
Score: 4 Votes (Like | Disagree)


The article demonstrates that Apple's electrical products are markedly safer than some of the knock-offs. There are objective standards for making this determination. As an electrical engineer, my professional opinion confirms the writer's conclusions. The evidence presented in the article is very clear, and the writer appears to be very knowledgable.
Score: 3 Votes (Like | Disagree)
Read All Comments

Tuesday June 2, 2020 1:31 am PDT by Tim Hardwick
Apple Music has cancelled its Beats 1 radio schedule for Blackout Tuesday and is suggesting that listeners tune in to a radio stream celebrating the best in black music. Blackout Tuesday is a campaign organized by the music industry to support Black Lives Matter after Minneapolis citizen George Floyd was killed by police in the course of his arrest. On launching Apple Music, many users...
Read Full Article • 409 comments