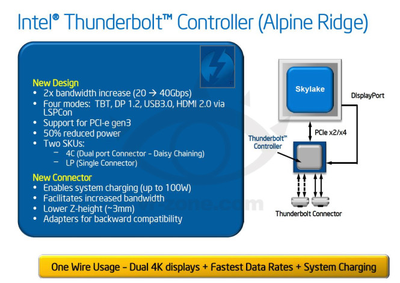 The site says Intel's new Thunderbolt controller, code-named Alpine Ridge, will see power consumption reduced by 50 percent, support for PCIe generation-3, and charging capacities of up to 100 watts. Backward compatibility will be maintained through the use of connector adapters, but the new Thunderbolt connector itself will be reduced in size.

Last April, Intel first announced Thunderbolt 2 in April before seeing it move to the Mac in October. There is no indication of when the third-generation of Thunderbolt could make its way to consumers.

SoAnyway
Thunderbolt 3 is nice but the Thunderbolt 1 ports in my 2011 iMac are still virgins. :o
Score: 56 Votes (Like | Disagree)

odedia
Can't they just release 1 version and get it over with? All these revisions just make it impossible to take this technology to mainstream adoption. The biggest advantage of USB 2.0 wasn't the technology, it was the fact that it stuck around for over 10 years.
Score: 32 Votes (Like | Disagree)

But i just bought a mac pro.


It's at times like these we do appreciate that the Mac Pro, being a professional computer, is expandable!

Why are they iterating so rapidly with versions of Thunderbolt?

Because no one is using it and Intel thinks that is because of speed?:confused:

Just make it affordable. All this speed means nothing if no one can afford to use it.
Score: 24 Votes (Like | Disagree)

Can't they just release 1 version and get it over with? All these revisions just make it impossible to take this technology to mainstream adoption. The biggest advantage of USB 2.0 wasn't the technology, it was the fact that it stuck around for over 10 years.

At first i was like wtf....i remember usb 2.0 being released to mainstream users in like 2003 and only now are we seeing usb 3.0 to be mainstream...meanwhile thunderbolt is getting new versions year over year.
at first i thought that sucks for developers and users/adopters/buyers...

but then i realized since the ports dont change and everything is backwards compatible.....this is actually good news.
Score: 17 Votes (Like | Disagree)

Why are they iterating so rapidly with versions of Thunderbolt?

Because when they showed the first version they said it was capable of 100 Gbps and that they would ramp it quickly. Which they are doing. They actually designed it to be much faster from the start instead of being pushed by other competing tech.
Score: 14 Votes (Like | Disagree)
Read All Comments

Wednesday May 5, 2021 11:03 am PDT by Juli Clover
As the Epic Games v. Apple trial progresses into its third day, Apple's internal documents and communications with various companies are continuing to surface, giving us some insight into the dealings that Apple has had around the App Store. Back in December 2018, Netflix stopped offering in-app subscription options for new or resubscribing members and instead began requiring them to sign up ...
Read Full Article • 416 comments