At CES last month, LaCie announced its "Fuel" wireless hard drive for iOS and Mac devices, allowing users to easily expand storage for their devices. With the Fuel now available for purchase, LaCie has given MacRumors some hands-on time with the Fuel, showing that the device does indeed live up to its billing for those willing to carry around an extra device as needed.

Similar to the Wireless Plus from parent company Seagate, LaCie's Fuel offers a 1 TB drive to provide ample storage for media, with iOS device users able to access content through the Seagate Media app.

With Fuel connecting wirelessly to iOS devices, the device also supports Wi-Fi hotspot functionality, allowing it to connect to an existing Wi-Fi network and passing that connectivity through to devices connected wirelessly to Fuel. Macs can connect to Fuel either wirelessly or via USB 3.0, as Fuel features a micro USB 3.0 port and an adapter cable to connect to standard USB ports on other devices. The cable can also be used to charge Fuel through an included AC adapter. Users looking for fast file transfer from their Mac should obviously opt for a wired USB 3.0 connection over the Wi-Fi option.

Fuel's ability to create its own Wi-Fi network allows up to five devices to connect to it simultaneously, with HD video streams being served to up to three devices at the same time. That feature is what creates an almost seamless experience for users while connected to the device, giving them the ability to wirelessly stream content straight from Fuel while still accessing the Internet from their devices.

Seagate Media app's main screen (left) and file view (right)
LaCie Fuel also includes Dropbox support, allowing it to automatically sync a user's Dropbox folder when turned on within range of a Wi-Fi network, ensuring that media and other files can be easily pushed to Fuel.

The Seagate Media app automatically categorizes media into five groups: Videos, Photos, Music, Documents, and Recent. Videos, photos, and music can be played right from the app, although not all file formats are supported. Documents generally require third-party apps to open, but tapping on them brings up the standard iOS sharing screen with quick access to compatible apps.

Aside from the "Media View" organized by file type, Seagate Media also offers a "Folder View" to allow users to browse the complete folder hierarchy without relying on the automatic groupings used in Media View. Files and folders can be sorted by name, size, date, or type, or filtered by type, and the interface also allows users to rename, delete, copy, and move files.

Fuel is available now from Lacie's store and other vendors at a suggested retail price of $199.99.

Otherwise, we can just assume you are extrapolating from "derp, I had a Seagate drive that failed once, and I remember a batch of bad drives from 2007".
Score: 15 Votes (Like | Disagree)


I've owned a LaCie external hard drive for over 6 years and it's still going strong.
Score: 6 Votes (Like | Disagree)


I have three Seagate drives - two pocket and one desktop and Ive had them for years. Each is written to daily, esp. the desktop as I back up to it. Ive had them all for over two years each and never had even a slight problem. Years ago I had a "Lacey" and that too performed flawlessly. Where are you getting your information?
Score: 5 Votes (Like | Disagree)

KdParker
They haven't messed up the external drives that I have been using.

This could be a nice addition if it really works.
Score: 5 Votes (Like | Disagree)

Otherwise, we can just assume you are extrapolating from "derp, I had a Seagate drive that failed once, and I remember a batch of bad drives from 2007".

This is about as close as you can get to a study on drive reliability rates by vendor. BackBlaze has some 27,134 hard drives in their inventory from differing vendors, and they've kept records on failure rates, because getting the most out of the drives they buy, and making sure they are reliable, is a key part of their business. 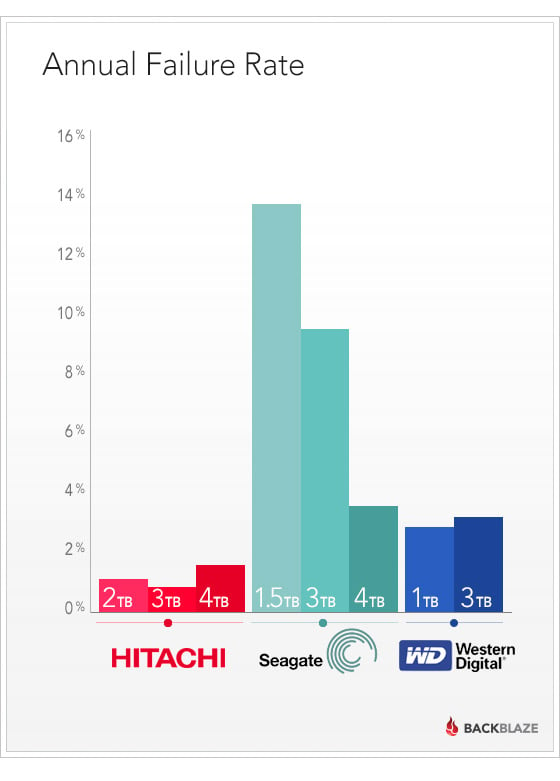 "The Seagate Barracuda Green 1.5TB drive, though, has not been doing well. We got them from Seagate as warranty replacements for the older drives, and these new drives are dropping like flies."

"The [Seagate] non-LP 7200 RPM drives have been consistently unreliable. Their failure rate is high, especially as they’re getting older."

"The bigger Seagate drives have continued the tradition of the 1.5Tb drives: they’re solid workhorses, but there is a constant attrition as they wear out."

This jives with my personal experience as well. I didn't record down specific numbers, but I could tell from my usage of dozens of drives where I work, that Seagate is pretty bad in terms of reliability compared to other brands. the 4TB drive comes closer tot he baseline in matching the other vendors, but still edges them out in terms of failure rates. Not something to be proud of.

The Backblaze informal study is pretty darned clear. A lot of people have anecdotal experience, and this confirms it.

I'd be interested to hear more than just the one Backblaze report. It's more comprehensive (which is fantastic), but still mostly meaningless.

How is it "mostly meaningless?" You asked for numbers, and the Backblaze report offers them, pretty conclusively.

Something tells me that anything that differs with your personal brand preference will be considered "mostly meaningless." On the other hand, Backblaze is not in the business of preferring one brand over another because the names look pretty. They need to buy drives that will give them the best reliability for the price, and that is what drove them to compile the data.

Likewise, I don't avoid certain drives just because I want to, and I suspect that others who have been similarly burned by Seagate in the past aren't grinding an axe just because it makes them feel good. We want drives that will work well, and will last a decent number of years. For many, it would appear that Seagate has so far not been able to deliver on that.


By the way, here's another study, which I'm sure you'll find equally "meaningless:" 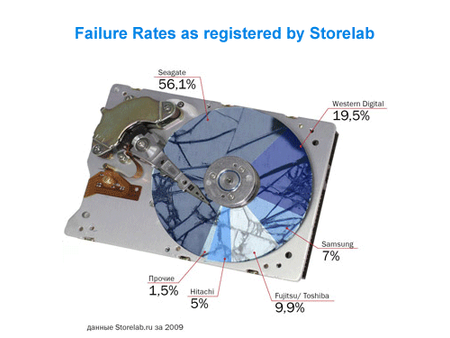 "The largest percentage difference can be seen with the market leader, Seagate, where its failure rate of over 56% is almost twice as high as its 31% market share."

djplaxe2109
Perhaps I'm just lucky.... but 3 Seagates and 2 LaCie drives and none of them have shown signs of slowing down after 3 years...
Score: 4 Votes (Like | Disagree)
Read All Comments