Teardown of Original Macintosh 128K Shows How the Mac Has Progressed

In honor of the Mac's 30th anniversary today, iFixit has partnered with Cult of Mac and The Vintage Mac Museum to tear down an original Macintosh 128K. Analysis of the well-known vintage hardware obviously reveals no surprises, but does highlight just how far technology has come in the past 30 years. 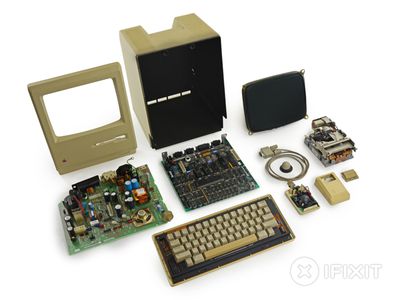 And we now have arrow keys! In typical Apple fashion, they ditched the arrows on the original Mac to force people to use the mouse, a strange new accessory at the time.

The engineering of the Macintosh 128K reflects the do-it-yourself culture from which this Mac emerged. Unlike the current Mac models, the 128K is relatively easy to repair, earning a repairability score of 7 out of 10. Most main components, with the exception of RAM, are user replaceable and easy to access since adhesive was not used in the assembly process. Deep-set case screws and electrocution hazards from power supplies are the biggest hindrances to a self-repair.


Originally released as the Apple Macintosh, the Macintosh 128K was unveiled thirty years ago by Steve Jobs on January 24, 1984 at the company's annual stockholders meeting. The presentation showcased the computer's then revolutionary graphical UI and speech technology.
27 comments

JosephAW
We have a dozen or so of these mac at our kids camp. I noticed that some of the 128k macs have white ceramic 68000 CPUs instead of the black chip.
Many still work and we have them networked to play a custom trivia game we wrote using Microsoft basic.
Still have some of the old games like alien arcade golf and Tetris.
We still have some of the original boxes and we have several of the carrying bags with zippers.
Score: 4 Votes (Like | Disagree)

The engineering of the Macintosh 128K reflects the do-it-yourself culture from which this Mac emerged. Unlike the current Mac models, the 128K is relatively easy to repair, earning a repairability score of 7 out of 10. Most main components, with the exception of RAM, are user replaceable and easy to access since adhesive was not used in the assembly process. Deep-set case screws and electrocution hazards from power supplies are the biggest hindrances to a self-repair.


The deep screws were easy to remove using the special allen wrench :apple: gave repair techs back then. I remember the biggest pain in the tush part was cracking open the case. :apple: had a special prying clamp/wrench for that too. It was still a pain the the (_!_).

I use to repair those old Macs. 30 years already? Now I feel old.
Score: 3 Votes (Like | Disagree)

Slix
We really have come a long way.

The deep screws were easy to remove using the special allen wrench :apple: gave repair techs back then. I remember the biggest pain in the tush part was cracking open the case. :apple: had a special prying clamp/wrench for that too. It was still a pain the the (_!_).

I use to repair those old Macs. 30 years already? Now I feel old.

For some reason I had to open my Mac Classic (upgrading the RAM I think?) when I was a teen. I didn't have the right tools as I was not a repairman.

Not sure what I used to pry open the case, but it didn't work well and the case was still stuck to the front.

So I put the thing face down on a bed and pull to remove the back as hard as I can, and it eventually pops out, but I heard a "crack" then "Pssshhhhhhhhhhh".

I knew that there was only one thing that could've made that sound... The CRT which normally has vacuum inside! The case had hit the little board on the tube's neck and broke the little glass thing at the end of the tube, which let all the air in!

I was smart enough to know that it meant, but I still tried to turn it on which resulted in a loud buzzing noise and blue sparks inside the tube's neck! :)

We (me and my dad) eventually found a replacement monitor (a Samsung!) but it wasn't easy since weren't a repair shop.
Score: 1 Votes (Like | Disagree)

neuromajor
Radical! Booting from a 3.5 floppy is so bad!
Score: 1 Votes (Like | Disagree)

notjustjay
I loved those old keyboards. Every key click had a very satisfying "ktung!" sound.
Score: 1 Votes (Like | Disagree)
Read All Comments