Apple today was awarded U.S. Patent No. 8,633,916 (via AppleInsider), which describes a touchpad that utilizes force sensors and acuator feedback. The buttonless design uses an array of sensors and an actuator to mimic the function and tactile feedback of the current trackpad found in the company's MacBook product lines. 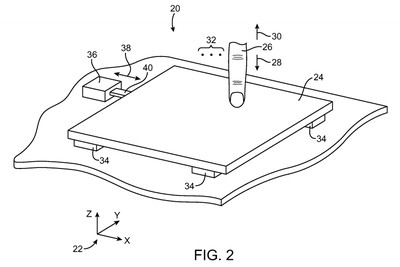 Currently, Apple's trackpad technology is based on an integrated button design. Surface touch sensors track the movement of fingers and a hinged button allows the trackpad to click when a user presses down on it. A switch located under the trackpad is actuated when a click pivots the trackpad downward on its rear hinge. The pivoting motion of this button makes it difficult to click near the rear edge of the trackpad and requires extra space within the chassis of the notebook.

In the newly awarded patent, which was filed in December 2009, Apple builds upon its current design by using a surface touch sensor and four corner force sensors to track finger movement and clicking input from the user. An actuator would be used to provide tactile feedback. Also similar to the current trackpad, a buttonless trackpad may have user-customizable settings that adjust the sensitivity levels for the click pressure or the tactile feedback.

Tactile feedback may be provided using an actuator. The actuator may be controlled by actuator drive signals. As a user of an electronic device interacts with the touch pad, the user may make gestures and perform other touch-related tasks. When the user desires to select an on-screen object or perform other tasks of the type traditionally associated with button actuation events, the user may press downwards against the surface of the track pad. When sufficient force is detected, appropriate action may be taken and drive signals may be applied to the actuator. The actuator may impart movement to the touch pad.

Whether Apple chooses to incorporate this new trackpad technology or not is unknown, but a move to do so would make sense considering that Apple's multi-touch trackpad debuted with the MacBook Air in 2008, and has made its way to every MacBook since then. But given the fact that it has been over four years since the patent's filing, Apple may simply have abandoned the proposed design for unknown reasons.

dannys1
Is anyone on this forum capable of reading, or just moaning?

It explains quite clearly that when you press down it would still function and feel a button now you miserable sods.

The benefit is that they can remove the dated hinge mechanism which makes more power for good things and you'll be able to click at both the bottom AND the top of the trackpad...basically its like now, but better.

Its not rocket science to read and understand.
Score: 17 Votes (Like | Disagree)

roadbloc
No thanks. I like my buttons. Never been a huge fan of touch. Trackpads are fine, but without two buttons for clicking, I'm out. And no doubt living in the past. :(
Score: 10 Votes (Like | Disagree)

A TrackPad without a button definitely seems like a good idea. I changed my settings to 'tap to click' practically on day 1 because it's much easier and quicker


Same here, it works perfectly fine for me. IMO Trackpads don't need a button anymore - a one- or two-finger tap is enough.

But i also think that we don't need force sensors and acuator feedback in the trackpad - but Apple will prove me wrong :p
Score: 4 Votes (Like | Disagree)

wickoo
I can't remember a single instance of a patent filing revealing an upcoming Apple product's feature. Could you guys point me to some recent one that turned out to be true?
Score: 4 Votes (Like | Disagree)
Read All Comments

Friday June 11, 2021 1:13 pm PDT by Joe Rossignol
On his newly launched Front Page Tech website, leaker Jon Prosser has shared renders showing off the alleged design of the next-generation iPad mini, which he says are based on schematics, CAD files, and real images of the device. In line with details shared earlier this month by Bloomberg's Mark Gurman and Debby Wu, Prosser claims that the new iPad mini will feature slimmer bezels around...
Read Full Article • 163 comments

Monday June 14, 2021 12:50 pm PDT by Juli Clover
Some M1 iMacs appear to have a manufacturing defect that causes the display to be mounted on the stand in a way that's not perfectly aligned, leading to a crooked display. YouTuber iPhonedo over the weekend published a review of the M1 iMac, and he found that his machine appeared to be tilted on one side, a mounting disparity that was visibly noticeable and proved with a ruler. Another...
Read Full Article • 252 comments