OpenEmu 1.0, an open source project designed to bring game emulation to OS X, has officially launched following a lengthy beta testing period. Though there are other emulator options for OS X, OpenEmu has been designed from the ground up for OS X. 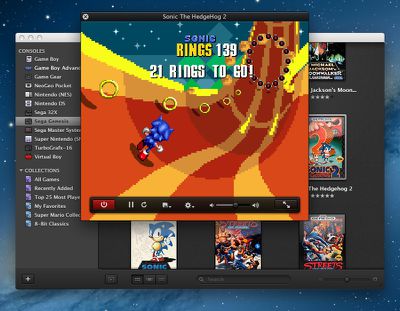 For the first time, the ‘It just works’ philosophy now extends to open source video game emulation on the Mac. With OpenEmu, it is extremely easy to add, browse, organize and with a compatible gamepad, play those favorite games (ROMs) you already own.

The emulator features a native OS X interface with a design that mirrors iTunes, offering up ROMs in a unified card-style menu organized by system. OpenEmu includes full save state support, allowing multiple ROMs to be played at once, and it also provides OpenGL scaling, multithreaded playback, and gamepad support.

Multiple controllers are supported, including console controllers from Nintendo, Xbox, and PlayStation, along with gamepads from Gravis, Logitech, and more.

ThunderSkunk
Time to haul out the NES USB controller and play the greatest game ever made on a nice bright crisp 27" iMac display.

Atomic Wasp
I've been waiting for this, for ages!
Score: 8 Votes (Like | Disagree)

zorinlynx
This is awesome. After years of dealing with half-baked emulators on the OS X platform, finally something that just works, out of the box, without having to download shareware "emulator enhancers" to use USB game controllers and so on.

Kudos to the dev team for this, keep up the great work.
Score: 6 Votes (Like | Disagree)

fyi. clicking the link does not take you to the website as implied but immediately starts download the app

The link is introduced with "OpenEmu can currently be downloaded", so there is no surprise that the link will download the app. Thanks for the warning though.
Score: 6 Votes (Like | Disagree)
Read All Comments