An Inside Look at Google's Reaction to the Original iPhone Introduction

Last month, longtime technology journalist Fred Vogelstein released his new book Dogfight: How Apple and Google Went to War and Started a Revolution, offering an inside look at the development of both the iPhone and Android ecosystems. An excerpt from the book sharing a behind-the-scenes look at the original iPhone introduction had been published in October, and a newly released excerpt from The Atlantic is now gaining attention for its description of Google's reaction to the iPhone unveiling in January 2007.

Among the most quotable bits comes from former Google engineer Chris DeSalvo, who related his reaction to seeing the iPhone shown for the first time. At the time, Google had been working on its "Sooner" reference device for Android, and it was clear that the iPhone represented a significant departure from that concept.

Chris DeSalvo’s reaction to the iPhone was immediate and visceral. “As a consumer I was blown away. I wanted one immediately. But as a Google engineer, I thought ‘We’re going to have to start over.’” [...]

“What we had suddenly looked just so . . . nineties,” DeSalvo said. “It’s just one of those things that are obvious when you see it.” 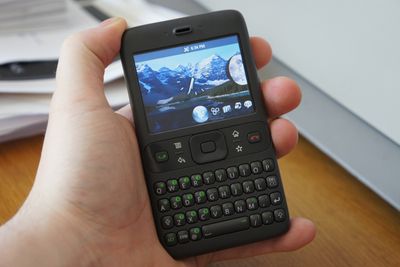 On the day Jobs announced the iPhone, the director of the Android team, Andy Rubin, was six hundred miles away in Las Vegas, on his way to a meeting with one of the myriad handset makers and carriers that descend on the city for the Consumer Electronics Show. He reacted exactly as DeSalvo predicted. Rubin was so astonished by what Jobs was unveiling that, on his way to a meeting, he had his driver pull over so that he could finish watching the webcast.

“Holy crap,” he said to one of his colleagues in the car. “I guess we’re not going to ship that phone.”

Not all of those close to the Android development process remember the history in that same way, as OS News points back to a 2012 comment from longtime Android engineer Dianne Hackborn claiming that the "Sooner" concept had already been dropped prior to the iPhone introduction. According to Hackborn, Sooner did, however, continue to be used for software development purposes for its stability relative to the "Dream" touchscreen concept that was also under development.

From a software perspective, Sooner and Dream were basically the same -- different form-factors, one without a touch screen -- but they were not so different as this article indicates and the switch between them was not such a huge upheaval. [...]

I don't recall the exact dates, but I believe the decision to drop Sooner was well before the iPhone announcement... though we continued to use it for quite a while internally for development, since it was the only semi-stable hardware platform we had. If nothing else, it helped remove significant risk from the schedule since software development could be done on a relatively stable device while the systems team brought up the new hardware in parallel.

The differences in recollections may hinge to some degree on whether the subjects related more to the hardware or software aspects of the iPhone and Android. As Vogelstein notes, Android itself remained an ambitious attempt to bring multi-tasking access to Google's services and other apps to any device, as opposed to Apple's locked-down iPhone hardware-software combination. So while those comparing the iPhone's hardware to Google's Sooner work immediately saw that Apple was changing the game, those focused more on the platform still saw that Android had the flexibility to adapt to the future of hardware.

Yes, even now as an Android user, I am still wowed by what Apple introduced. It was what even most ultra-geeks wanted in a device. One to rule them all.

At the time it connected and made simple so much technology that it was indeed magical.

Nowadays, it is still an excellent phone.
Score: 58 Votes (Like | Disagree)

zbarvian
I've personally never witnessed a technological revolution as massive and momentous as the I first iPhone. Many years would have passed before anyone else came close to the design, engineering, and experience of the hardware and software. I remember playing with it for the first time, and knowing I had never been so delighted and amazed by a piece of technology.

Nobody, not even the most firm Android proponents can deny that the iPhone changed the way we see computers, at least mobile ones. Its influence can be found in every crevice of the marketplace.
Score: 38 Votes (Like | Disagree)

abhishake
Apple has changed the world.
Score: 33 Votes (Like | Disagree)

Traverse
Android is a fine OS, but no one can deny that the original iPhone was truly an innovative device and I mean that in the traditional sense of "innovative".

Today, companies through the word "innovative" around constantly to describe incremental improvements. In truth, innovative should me a major change, something that creates an entire new class or fundamentally changes the way we accomplish things. The original iPhone started that, it was innovative.
Score: 30 Votes (Like | Disagree)
Read All Comments

Friday May 20, 2022 6:50 am PDT by Joe Rossignol
Earlier this week, The Information's Wayne Ma outlined struggles that Apple has faced during the development of its long-rumored AR/VR headset. Now, in a follow-up report, he has shared several additional details about the wearable device. Apple headset render created by Ian Zelbo based on The Information reporting For starters, one of the headset's marquee features is said to be lifelike...
Read Full Article • 122 comments