Apple has added the ability to gift ebooks to friends and family through the iBookstore, reports Macworld. Users have long been able to purchase songs, movies or TV shows through iTunes, as well as standard gift cards, but the ability to gift a particular book is new.

Books can be gifted immediately, or the gift email notification can be held for a particular date, making holiday shopping particularly easy. Apple added the ability to gift App Store apps back in 2010. 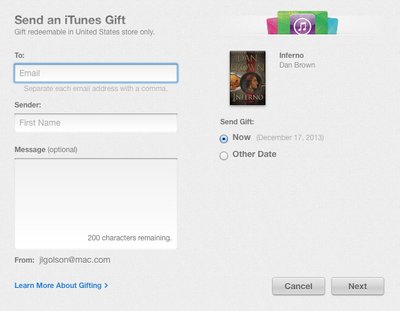 Gifting in the iBookstore works identically to Apple’s iTunes and App Store counterparts: Just choose the book you’d like to gift, then tap either the dropdown arrow next to the price (on a Mac) or the Share button (on an iOS device). On a Mac, select “Gift This Book”; on iOS, choose “Gift”—then add the recipient’s email, the sender’s name, a brief message, and the date you want it sent (now, or later). One note: On iOS, it looks like you have to tap the “Today” field under “Send Gift” in order to change to a different date.

Users can only purchase gifts for recipients using their same country store; there is no ability to gift books internationally.

Here's a thought, you could always ask the person you're gifting it to if they have it already. ;)


Here's a thought, a lot of gifts are supposed to be a surprise.


That would make corporate purchases for much easier!
Score: 5 Votes (Like | Disagree)

So, a dictionary has correctly recorded the transformation in usage of a noun to a verb. What's your point? I expect it also records the fact that 'task' has, excruciatingly, become a verb as well. It's the job of a dictionary to reflect changes in usage. The fact that it does so is irrelevant. Mindlessly quoting an entry in a dictionary adds nothing. You have to think; thinking is so important.

The issue is: does 'verbing' make sense when we already have words that will do?

"It's now possible to give a book from the iBookstore" (If I give you a book it's a gift, wouldn't you say?)

"It's now possible to gift a book from the iBookstore"

What's the point of the latter, when the former is perfectly clear?

I'm hoping that someone will reply "It's not that big of a deal" to make my day complete.
Score: 2 Votes (Like | Disagree)

decksnap
I'm still waiting on the feature to loan books to friends.
Score: 2 Votes (Like | Disagree)

Apple also needs to add the Wishlist feature to the iOS app of iBooks as well as the Mac App Store.
Score: 2 Votes (Like | Disagree)

milo
What happens if you buy a book, app, or music for someone and they already have it? Is the software smart enough to know they already have it if purchased from Apple (makes the most sense in the case of apps)? And if not, do users have the option of exchange or return? That has always been the main reason I've avoided buying apps as gifts.
Score: 2 Votes (Like | Disagree)
Read All Comments