Tablets Predicted to Make Up Half of Total PC Shipments in 2014, iPad to Fall Further Behind Android

Over the course of the last several years, notebook and desktop PC shipments have declined as lighter, more portable tablets have surged in popularity and begun replacing traditional computers. In 2014, tablets will come even closer to dominating the PC market, accounting for half of all shipped PCs, according to a prediction from research firm Canalys. 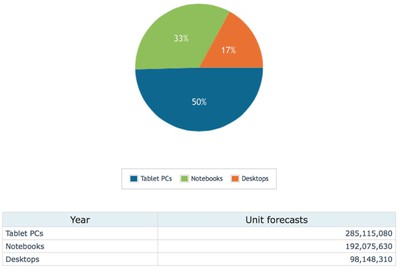 Out of the total PC market, which includes notebooks, tablets, and desktops, tablets are predicted to make up a total of 50 percent of all shipments. Apple's iPad line up will account for 30 percent of tablets shipped, while Android tablets will make up 65 percent of shipments. Microsoft's tablets are expected to be responsible for five percent of total tablet shipments.

In the third quarter of 2013, tablet PC shipments accounted for 40 percent of total PC shipments. Canalys forecasts 285 million tablet shipments in 2014, which will surge to 396 million units shipped in 2017.

While Apple will remain a highly profitable player in the PC market over the course of 2014, Canalys expects that the company will see a decline in its market share. In 2013, Apple managed to hold the top vendor position in the PC market thanks to combined sales of iPads and its desktop and notebook computers.

"Apple's decline in PC market share is unavoidable when considering its business model. Samsung narrowly took the lead in EMEA this quarter and Apple will lose its position to competitors in more markets in the future," said Canalys Senior Analyst Tim Coulling. "However, Apple is one of the few companies making money from the tablet boom. Premium products attract high value consumers; for Apple, remaining highly profitable and driving revenue from its entire ecosystem is of greater importance than market share statistics."

In August, Canalys' research suggested non-iOS tablets had surpassed the iPad in global market share for the first time, with Apple responsible for 42.7 percent of tablet shipments while tablets from Samsung, Amazon, Acer, Lenovo, and others combined to make up 57.3 percent of shipments.

Canalys predicts that Apple's share of the tablet market will shrink further in 2014 under the continued onslaught of less expensive Android and Windows tablets. Apple's cheapest tablet is the original iPad mini, which is priced at $299 and still significantly more expensive than competing products like the $229 Nexus 7 from Google and the $229 Kindle Fire HDX from Amazon.

macduke
Apple created the tablets market in 2010. There wasn't anything before that worth buying. Apple is never going to compete with $200 tablets for the same reason they never competed with $350 eMachines or netbooks or anything like that. With Android you also have these complete garbage $75-100 tablets floating around Asia that will make Apple's market share look even worse. But sales of the iPad will continue to grow, Apple will push the premium experience, and people will buy it because it's fast, easy, and has high-quality software and apps. If Apple starts putting out crap software, or doesn't get it's services in order, then it might have a problem. But I think in the long-run they'll be ok. They're also going to completely blow up new markets like wearables with the iWatch.
Score: 23 Votes (Like | Disagree)

pubwvj
"Shipped" is meaningless. Microsoft and Samsung both shipped huge numbers of units, and both had huge numbers that didn't sell. Like nearly a billion dollars worth, each.

What matters is "sold" not shipped. If you look at sold then Apple does far better.

Even more important is sold and then buys again. Again Apple does far, far better.

chromite
Apple is doomed. Steve should never have died. He made the wrong call by doing that.
Score: 17 Votes (Like | Disagree)

ghost187
I haven't seen a single android tablet in the wild that cost over $300 aside from store shelves.
Score: 13 Votes (Like | Disagree)

iPads are still in the lead as far as I'm concerned. I do not believe Android will dominate the tablet market. Consumers love iPad and they are not interested in subpar experiences regardless of price.


Who cares if Android "dominates" the market?

You literally have dozens of Asian companies that sell sub-$100 and sub-$200 crappy tablets. Even if Android has 80% of total tablets sold, who cares?

What matters is Apple sells high-quality tablets with an ecosystem of excellent apps and a smooth user experience, and sell them by the tens of millions every year. As long as they show growth, develop technologies (whether "new" or not) into high-quality user experiences that people enjoy, it doesn't matter!

There will always be folks that buy a Kurio or a Hisense Sero or a Nabi or an even more generic obscure brand. So what?
Score: 11 Votes (Like | Disagree)

iOS really needs to support "shared folders" across apps, keeping the robustness of apps sandboxing, but allowing the user to share files across apps (always as a request from the user, not an app request, since the later would be dangerous). Without this, I cannot see any iPad use other than net surfing or fun.


You apparently don't own an iPad.
Score: 9 Votes (Like | Disagree)
Read All Comments