Retina iPad Mini Has 1.3 GHz A7 Processor With 5X the Performance of the Original Mini

Apple's new Retina iPad mini includes the same 64-bit A7 chip used in the iPad Air and the iPhone 5s, which offers significantly better performance than the A5 chip found in the original iPad mini.

According to new Geekbench 3 benchmarks, the Retina iPad mini is running at 1.3Ghz, much like the iPhone 5s. The iPad Air, however, clocks in at 1.4Ghz, giving it a slight performance edge over both the iPhone 5s and the new mini. 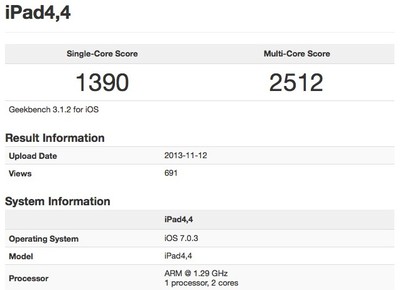 It is unclear why the mini is clocked at 1.3Ghz instead of 1.4Ghz like the iPad Air, but in terms of real world usage, users are unlikely to notice the small speed differences. It is possible that Apple chose the lower clock speed in the iPad mini to improve overall battery life or to reduce heat within the smaller chassis.

Apple's Retina iPad mini went on sale last night at midnight and is currently still available from the Apple Online Store and in Apple retail locations via Personal Pickup.

Agreed. I don't understand why people keep saying one is better than the other. It simply comes down to an individual's needs/preferences.

And they all think the other half is stupid. :mad:
Score: 9 Votes (Like | Disagree)

Got an Air already ummm
In the end, for me, I think the Air's screen size suits my need more

I think the mini is great for the girls though!


Nice try to justify what you just bought while you realize you bought the wrong product. ;)
Score: 9 Votes (Like | Disagree)

in more ways than one


Why is this even a competition? At the end of the day they are both fantastic devices.
Score: 7 Votes (Like | Disagree)


Your example only works when the iPad fails to perform. It is performing well at every app that designed for it.

Are you coming from the android or windows camp where stuff are grossly unoptimized and required so much RAM to run?
Score: 6 Votes (Like | Disagree)

Ryth
I just went over to the Apple store and compared the Retina to the non-retina....lordy what a difference.

The Mini Retina is going to sell like crazy if they can make enough.
Score: 5 Votes (Like | Disagree)

darkslide29
Hey what's all this Air vs Retina Mini trash talk?? :confused:
What ever happened to bashing Android? :D

There is absolutely no right answer to "Is an Air or Mini better?".

There are just so many variables, many more that I haven't even touched on, that it really is such a personal choice.
Not only is there not a right answer, but your opinion doesn't really mean much in something like this because of how personal it is.

To each his own, whichever you choose, it is still an amazing new iPad running iOS 7 :)
Score: 5 Votes (Like | Disagree)
Read All Comments