Apple has begun installing decorations at the Yerba Buena Center ahead of Tuesday's media event, where Apple is widely expected to introduce new iPad and iPad mini models.

MacRumors reader David Jones sent in this image of colorful decorations going up on the side of the San Francisco building. The graphics match the invitations sent out to media members earlier this week. 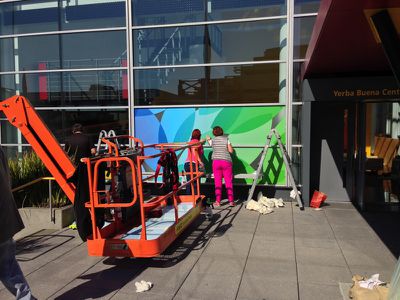 Click for larger
The October 22 date was first reported by AllThingsD earlier this month, and was quickly confirmed by the The Loop's ever-reliable Jim Dalrymple.

The original AllThingsD report claimed that event will focus on the iPad updates, but that OS X Mavericks and the redesigned Mac Pro will also be featured at the event. Apple is due to release a number of other product updates, perhaps most notably new MacBook Pros, but it is apparently still unclear whether those updates will be a part of next week's event.

Update: Jones has now caught a photo of the plans showing the overall design for the graphics.

BornAgainMac
At the event, I am hoping for these words... "Mavericks will be available t o d a y"
Score: 14 Votes (Like | Disagree)

Count Blah
Looks like we found some of the inspiration Ive used to come up with the 5c colors (Check out the pants in the picture).
Score: 14 Votes (Like | Disagree)

Wow, you must be fun at parties. :rolleyes:
Score: 13 Votes (Like | Disagree)

Lapidus
Please don't forget my 27" 4K thunderbolt display with build in GPU and some USB3 ports.
Score: 13 Votes (Like | Disagree)

This was the greatest personal computer company in the world before it turned into an iToy show.


Some would argue computing is more and more personal with iPhones and iPads than desktops ever were.
Score: 10 Votes (Like | Disagree)
Read All Comments