Apple sent an email to developers today, asking that they finalize their apps for submission to the App Store ahead of the public release of iOS 7 next week. The email specifically mentions several new iOS 7 features as well as the new APIs that take advantage of iPhone 5s features like the M7 motion coprocessor. 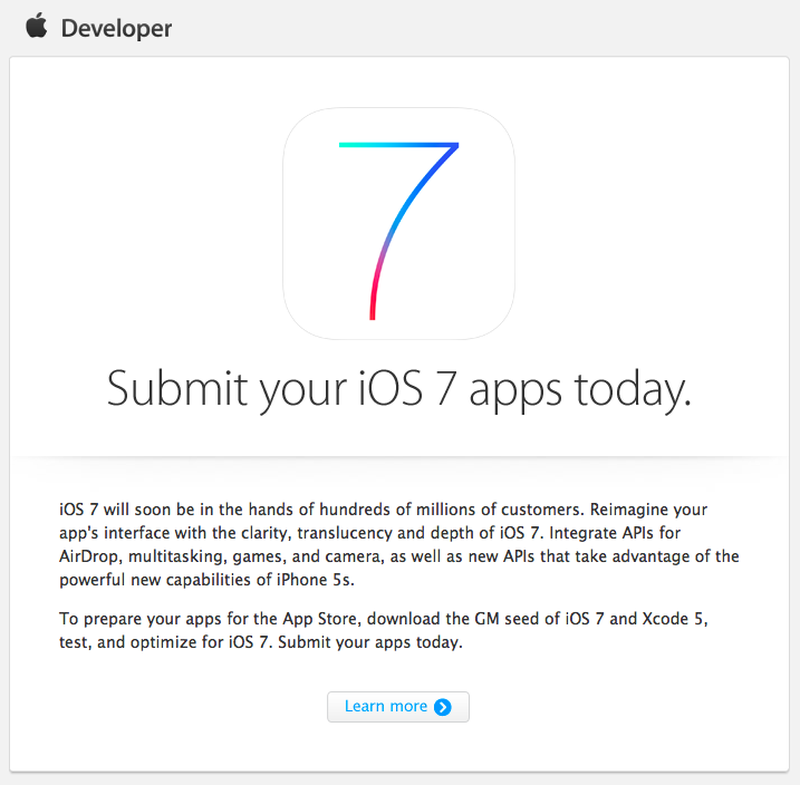 Apple also has published a guide for developers on the new features built into the iPhone 5s, including the 64-bit A7 processor, OpenGL ES 3, the M7 motion coprocessor and the Core Motion APIs.

iPhone 5s is powered by Apple’s next generation A7 chip, making it the world’s first smartphone with 64-bit desktop-class architecture for blazing fast performance in the palm of your hand. The iOS kernel, libraries, and drivers now take advantage of 64-bit, delivering up to 2x faster CPU and graphics performance for your apps and games. And it’s easy to build and run your apps in 64-bit because Xcode automatically builds your apps into binaries that will run on both 32-bit and 64-bit devices.

Apple is asking developers to test their apps for iOS 7 compatibility, with requirements that apps be optimized for the Retina display and for the 4-inch display introduced with the iPhone 5.

iOS 7 is scheduled for public release next Wednesday, September 18.

zorinlynx
Ugh. 32 bit and 64 bit in one app. UI resources for iOS 6 and iOS 7 design in one app. Apps are going to bloat even bigger and waste more space on the device.

I feel really sorry for anyone who gets suckered into buying the 8GB iPhone 4S.
Rating: 5 Votes

• Apple Releases iOS and iPadOS 13.3.1 With Toggle for Turning Off U1 Chip in Latest iPhones (72)
• Two of the iPad's Creators Share Thoughts on Its Development, Evolution, and More (32)
• Filmic's New DoubleTake App Lets iPhone Users Shoot Video From Multiple Cameras Simultaneously (45)
• 'iPhone 9' Production Reportedly Scheduled for February, But Could Be Impacted By Coronavirus Outbreak (61)
• MGM Held Talks With Apple and Netflix to Gauge Interest in Acquisition (116)
• FCC Opens Up 3.5GHz Spectrum for Full Commercial Use, Apple's Newest iPhones Already Offer Support (29)
• Apple Patent Imagines iMac Made From a Single Sheet of Glass (125)