Norwegian software company Opera Software ASA has released a brand-new WebKit-based browser named Coast for the iPad. The browser, which comes with the tagline "the browser that should have come with the iPad", is the product of one and a half years of software development at the company's headquarters in Oslo.


Coast is Opera's attempt to build a browser actually optimized for a touchscreen interface, such as the one on the iPad, and dispenses away with the traditional toolbar seen in most internet browsers. Instead, users swipe back and forth to navigate between pages and, in order to keep the interface as clean as possible and to help users focus on the web page they are currently viewing, the URL box is missing. There are no tabs for individual pages; users can switch back and forth using thumbnails, much like switching applications in iOS 7, and close down pages by swiping upwards.

The iPad is nearly buttonless; why shouldn’t the apps for it be? Elements such as back and forward buttons are gone from Coast. All navigation is done by swiping the way you naturally would on an iPad – just like in a good iPad app. A single button takes you to the home screen, and another shows the sites you have recently visited – that’s about it for buttons in Coast.

When using touch-based navigation, small buttons that work on a regular computer don’t work well on a tablet. It’s not about just enlarging already existing elements; it’s about making the design interesting and uncluttered.

Essentials such as website security are handled in the background, with can’t-miss warnings when a suspicious site is accessed and extensive info on site reputation. 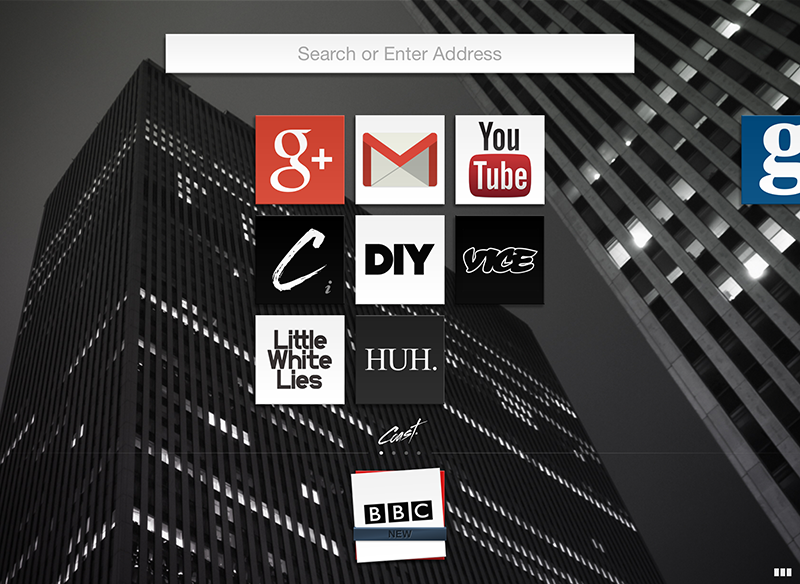 The home screen of Coast displays a number of common websites, such as YouTube, Google+ and Vice, which can be shuffled around and deleted if necessary. Commonly-viewed pages will also start appearing over time. Unlike Opera's previous browser, Opera Mini, Coast now relies on WebKit, the default engine built into iOS to render pages, rather than its own. The project is simply an attempt by Opera to try and redesign the browsing experience on a tablet device, and the company plans to release it to the iPhone and other devices such as Android soon.

Coast is a free download from the App Store and is currently only available on the iPad. [Direct Link]

Just curious, does this run at full speed as it should? Or is Apple still crippling third party browsers to keep Safari "ahead".

For the record Apples high speed JavaScript engine is a bit of a hack. It requires access to RAM in a way that leaves the OS exposed to malicious code. Safari is a trusted app that can use the API in a tightly controlled maner to limit this risk.
Adding the process isolation overhead to the code in order to make it suitable for third party developers would likely eliminate much of the performance advantage. So in reality there is little advantage for third party apps to want access to use it over the engine they already have access to.
Rating: 4 Votes

Dustman
Just curious, does this run at full speed as it should? Or is Apple still crippling third party browsers to keep Safari "ahead".
Rating: 4 Votes

braintumor
Wow... First time I prefer to use an alternative browser over Safari... Its really intuitive, quick to use and you immediately feel that this should be how a tablet browser should really look like!

Just curious, why doesn't Opera make this their default browser for touch devices instead of offering this next to "old" Opera browser with a different name?
Rating: 2 Votes

vladobizik
Wow, this is amazing, just after a few minutes of trying it out, I am astonished. This is what a true mobile touch browser should work like. This is the first time I wish iOS offered you the option to change the default browser. We'll see how well it works out for me over time.
Rating: 2 Votes

redscull
This is much closer to the way mobile browsers should have always worked. The desktop-inspired, tabbed holdovers are terrible. Google Chrome for iPhone (but specifically not the iPad version) is the best mobile browser on iOS right now. And finally, with this Opera Coast, we have a proper iPad browser.

I really hope the new iOS 7 Safari (which I myself have not tried) understands and does the kind of stuff that iPhone Chrome and iPad Coast are doing. This is good user interface design, something Apple hasn't really made progress on in quite a few years.
Rating: 2 Votes

Tankmaze
wooahhhh, now THIS is GOOD. this is what safari on iOS 7 should be.
opera got a lot of smart people working there.
Rating: 2 Votes

Michaelgtrusa
I hope that this will inspire the Mac version. Looks good.
Rating: 2 Votes

dxstewart
I tried it out last night... pretty cool. I like the swiping to go back, reminds me of using my MPB and its trackpad. I like also how when you search, it's trying to find what you're looking for (suggestions I suppose).
Rating: 1 Votes

I really hope the new iOS 7 Safari (which I myself have not tried) understands and does the kind of stuff that iPhone Chrome and iPad Coast are doing. This is good user interface design, something Apple hasn't really made progress on in quite a few years.


The UI is basically identical to the iOS home screen, including page indicators and "wiggling" icons if you keep pressing, to rearrange or delete them.
Rating: 1 Votes

A functionally-limited wrapper for WebKit, with a terrible app icon. I do not understand all the love for this browser from the majority of the previous posts.