Apple may be implementing some changes to the way that it ranks apps for its Top Charts in the App Store, reports TechCrunch, citing studies from a number of app analysis services. It appears that new factors, such as app ratings and user engagement, could be influencing app position and preventing developers from artificially inflating the rankings.

According to app marketing service Fiksu, app rankings began fluctuating in late July, favoring apps with ratings of four or more stars in the App Store. While those apps jumped to higher positions without a corresponding increase in downloads, apps with poor ratings saw their rankings fall. 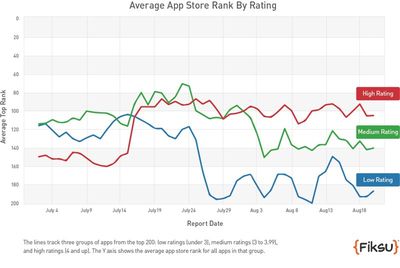 Historically, apps have been ranked based on both download volume and velocity, allowing apps that garnered a high number of downloads in a short amount of time to shoot up the App Store charts. Fiksu also notes that App Store rank positions, which were previously updated in 15-minute intervals, now update once every three hours to prevent underhanded rank-gaming practices.

We suspect they are adding a 'buffer' period to prevent rank manipulation through short download bursts often associated with robotic downloads and other actions not in the best interests of the app ecosystem. Three hours allows enough time to identify anomalies and remove apps before they suddenly appear at the top of the rankings.

Niren Hiro of SearchMan told TechCrunch that user engagement may be a factor as well. Time spent within apps, the number of app opens, and ongoing usage are affecting category rankings, as noted in the chart below.

App Store search algorithms may also be changing, favoring improved app discovery. MobileDevHQ CEO Ian Sefferman cites an example involving a search for iPhone apps from the iPad. While such a search used to return an identical list of apps on both the iPad and the iPhone, the results are now different.

It remains unclear whether Apple is merely experimenting with its App Store rankings with these new inclusions or if it is in the process of making sweeping changes to the ranking process. App discovery has long been a work in progress for the company and efforts to improve its ranking algorithms could help users locate higher quality content.

musika
I have a good idea! Make searching usable again! 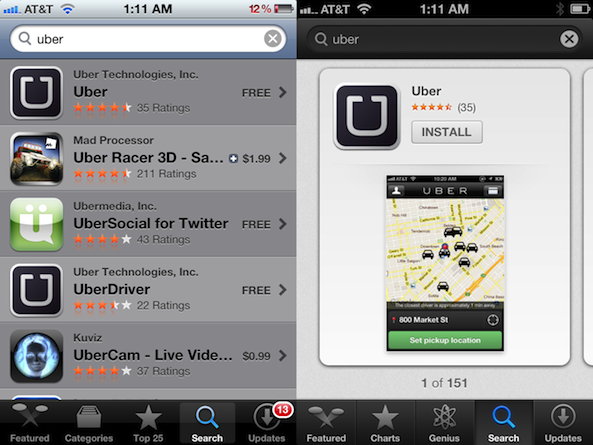 These are things they should have been doing years ago. The app store is a total mess for both consumers and developers and Apple hasn't been helping. Better late than never, I guess, but they really need to stay on top of this, and quickly cut down the schemes that people will use to game the system (even when Apple fixes something, they will inevitably find another way to cheat).

A lot of developers are getting frustrated and with Android slowly looking like a more viable alternative every year, the state of Apple's app store could start to be a disincentive for developing on iOS first or exclusively. Listen, I know Google's app store also has massive problems, but I'm just saying Apple needs to be proactive and stay out in front by making sure they have by far the best app store experience for both consumers and developers. There's still a lot they need to work on other than the rankings. Like have developer-specified trial period for paid apps (without risk of the Lodsys threat by using IAP), allow app bundles to be sold, discounts (if I previously bought one app by a developer, maybe I can buy another of their apps at 50% off), better recommendations, better statistics available for developers, etc.


I agree with everything you said except the part about Android looking like a viable alternative.

Take the problems with the App Store, multiply them by the number of Android application stores, and then add a heaping dose of fragmentation and rampant piracy. Stir and bake at 350.
Score: 11 Votes (Like | Disagree)

I have a good idea! Make searching usable again!


It's especially great when searching for the exact name of an app doesn't even return it in the first 10 or 20 results.
Score: 6 Votes (Like | Disagree)

Oh! You forgot to add 3 gallons of misinformation, a heaping scoop of FUD and a dash of Apple "special sauce". :rolleyes:


Don't get your knickers in a twist. I was talking as a developer, not as an Android or iPhone user. It was a comment on the state of the two as developer platforms, not as OS's or what have you.

As a developer, none of the Android stores succeed where Apple fails. And they have problems on top of the ones the App Store does. Legitimate problems that should be addressed so that non-Big Name developers (like me) have a chance to make money in the Android app world.
Score: 5 Votes (Like | Disagree)

jclardy
I hope it is a permanent switch, as this will help promote less "popular" apps in their respective search categories. A niche app may be awesome (highly rated) but have a tiny user base which would mean that it gets lost in searches under the old system.
Score: 4 Votes (Like | Disagree)
Read All Comments