While rumors of an Apple television set have quieted down in recent months, the company's living room ambitions remain at the forefront amid new Apple TV offerings and continued reports of talks with content providers.

In a brief report today, Digitimes claims that Apple has been talking to LG about the possibility of securing display panels in the range of 55-65 inches for a future television set. The panels are said to be of Ultra HD, or 2160p, resolution.

Rumors are circulating in the market that Apple is interested in purchasing 55- and 65-inch Ultra HD TV panels from LG Display.

However, the rumors state that Apple is still testing the technology and has yet to finalize its orders with LG.

Apple is said to also be considering Sharp to provide panels for its needs.

Digitimes had reported back in March that Apple was looking to launch an Ultra HD television set late this year or early next year. That report had indicated that Apple and Foxconn were in discussions about mass production of the TVs but that Apple was sill considering where its display panels would come from given industry constraints. 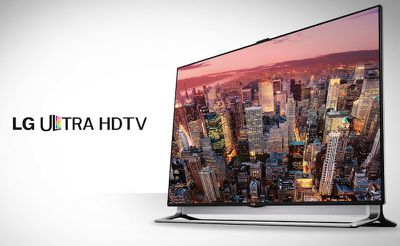 Pricing remains a major issue for Ultra HD television sets, with LG's offerings currently priced at $7000 for a 55-inch model and $9000 for a 65-inch model. Still, prices are dropping fairly quickly as technology and production efficiency improves and more companies enter the market.

Excitement about an Apple television set ramped up in the wake of the publication of Steve Jobs' authorized biography in late 2011, in which he was quoted as saying he had "finally cracked it", but despite numerous rumors the product has yet to come to fruition.

The very vast majority of people can't stream 4K at a worthwhile bandwidth. Heck, most people can't even stream 1080p without heavy compression. Apple has only just started offering 1080p streaming and it's nowhere near Blu-ray quality, but that was to be expected if they wanted people to be able to stream it. Now people should be able to stream 4x the pixels while the average Internet bandwidth has stayed the same?

The effect of 4K on a movie is more subtle than the jump from SD from HD was, and also more subtle than the jump from a regular display to a Retina display (considering you're displaying a lot of high-contrast vector graphics like text and other sharp UI elements on a computer/phone). In a movie, contrast is never as high and sharpness is often ultimately limited by the lens used to capture footage. You'll often notice several elements in a scene are slightly out of focus because of the depth of field.

Having seen 4K TVs in person, they look awesome but the resolution part isn't mind-blowing. You really have to get into big TVs (60"+) to notice it at average distance. The sharpness gain you get from the resolution would totally be negated by heavy compression artifacts if you were to compress 4K movies to the point they can be streamed by most (10-15Mbps). For reference, a 1080p Blu-ray movie is around 35Mbps, so obviously quadrupling the number of pixels while reducing the bandwidth significantly isn't going to look to good.

So yeah, who's willing to drop $5k+ on a 4K TV which's image quality wouldn't be better than a much cheaper 1080p set because there's no proper way no distribute 4K yet? If Apple had a plan to instantly become a high-speed ISP like Google Fiber it could work, but I highly doubt they're willing to make such an investment.

After all, we're talking about the same company who sells songs in 256kbps in 2013, and dare call them "CD quality". Even if people were ready for 4K (they're not), Apple would probably be too cheap on bandwidth anyway.
Score: 14 Votes (Like | Disagree)

So you go out and buy that whizbang new 4k tv. Then what? Cable companies don't broadcast in 4k, there are no 4k discs to rent, no satellite 4k to pick up and nothing off air in 4k. So where does it come from? Oh yeah, the internet. Brought to you by the same US Cable companies that think you should lick their b@lls for "upgrading" you to 5Mbs. Call me cynical, but this is one cool technology that has nowhere to go.
Score: 3 Votes (Like | Disagree)

Nightarchaon
Having "just" this year upgraded from 1080i TV i bought when HDTVs where just out and expensive, to a 1080p Passive 3D screen , i will now NOT be upgrading my TV again until at the earliest 2020.. And that will only be if there is content out for it that i want..

The driving force behind me upgrading from my Rear Projection set to HD originally was the PS3s release, so maybe the PS5 will change my mind on 4K, but i doubt it.
Score: 2 Votes (Like | Disagree)

Apple's TV plans make me nervous, in the sense that sometimes it seems they're reaching for something I just won't be interested in and/or able to use. I'd love to see an Apple TV + TiVO type marriage, but with Apple's brilliance and improvements all over it. Whatever it is, allow me to connect it to whatever TV I want, because (as stated before) I'm not giving up my 80" tV for some 65" Apple thing... won't happen.

Most people don't have over 50". A home theater enthusiast a iTV will go in the bedroom or game room
Score: 1 Votes (Like | Disagree)