Famed Designer Richard Sapper Was Once Recruited by Steve Jobs

In an interview with design magazine Dezeen, German industrial designer Richard Sapper revealed that he was once recruited by Steve Jobs to do design work for Apple. The interview doesn't specify when the recruitment happened, but it could have been in the early 80's when Apple was just starting out, or in the mid-90's after Jobs returned to the company. 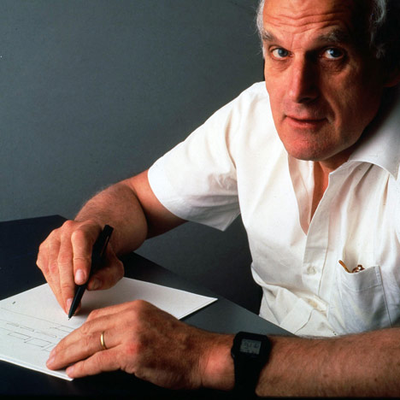 Jobs once wanted to hire me to do the design of Apple [computers] but the circumstances weren't right because I didn't want to move to California and I had very interesting work here that I didn't want to abandon. Also, at that time Apple was not a great company, it was just a small computer company. They were doing interesting things so I was very interested, of course, but I had an exclusivity contract with IBM.

The 81-year old Sapper has been designing products for nearly 60 years, including lamps, phones, radios, coffee makers and an IBM ThinkPad notebook.

On the fifth row, second from right, is a clock face that looks suspiciously like that Swiss Federal Railways clock, that was in the news around November of last year.


It is the Swiss Railways clock, in watch form. But this was just a watch he owned, he had nothing to do with the design.

at that time Apple was not a great company, it was just a small computer company.

I can imagine (even if he's millionaire today) how bad that sentence sounds today.


That's a bit harsh on him, since there could have been many reasons for him to decline joining Apple. Steve might have failed to convince him that Apple's vision was worth working for. Or his style of design was different to how Apple wanted their design.

Looking at Thinkpads, they are of a different philosophy to Macbooks. One's utilitarian and a workhorse, the other is sleek and modern. Both are some of the best designs in laptops thus far, but for entirely different reasons.
Score: 4 Votes (Like | Disagree)


Looking at Thinkpads, they are of a different philosophy to Macbooks. One's utilitarian and a workhorse, the other is sleek and modern. Both are some of the best designs in laptops thus far, but for entirely different reasons.


Agreed. The ThinkPad is an incredibly good design.

I have learnt however that MacRumors is the worst place to discuss design. Just look at the panning the Phillipe Starck yacht or the Ruth Asawa fountain got.

Both beautiful things in their own ways, but not 2mm thick aluminium slabs designed by a certain Brit, so immediately dismissed by those who prefer to be told what they like.

(And before I get destroyed - I think the design of my MacBooks and iPods are beautiful. But the only and best (there's no such thing - design is not a race) style in which something should be designed? Absolutely not.)
Score: 3 Votes (Like | Disagree)

The ThinkPad looked great for 1992.

It hasn't aged so well, though.


I suppose. But, yeah, it never evolved. It basically stayed the same forever. The Lenovo ones still look like they were made 15 years ago.
Score: 3 Votes (Like | Disagree)

inscrewtable
This sound like one of those "guy who declined to manage the Beatles" stories.
Score: 3 Votes (Like | Disagree)

The ThinkPad has got to be one of the ugliest laptops in the history of computing. Thank God IBM had an exclusivity deal with this guy.

It hasn't aged so well, though.
Score: 3 Votes (Like | Disagree)
Read All Comments