As the developer beta testing period for iOS 7 continues, user Hamza Sood (via 9to5Mac) has discovered hidden settings within Apple's latest iOS that include toggles for additional gesture, folder and multitasking options. It is unclear, however, how Sood came across the settings. 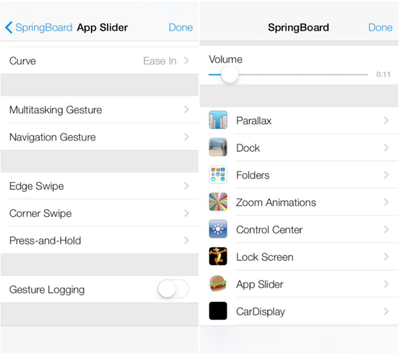 The gesture settings include options for a new "corner swipe" gesture. In addition, there appear to be expanded options for the "press and hold" gesture, which has so far only been used to prompt "edit mode", which allows users to move and delete apps. There also appears to be a section for "edge swipe", which has become prominent in Apple's redesigned stock iOS 7 apps. 9to5Mac notes that the settings indicate that these gestures could be used for quick app switching.

Other settings include additional functionality on the home screen, such as being able to completely delete stock apps like Newsstand, which has long been a requested feature from some users. The ability to create folders within folders is also present.

The final group of settings is used to tweak the visual flow of the new operating system, with settings responsible for blur effects, coloring and animation speed.


As 9to5Mac notes, it is highly unlikely that most of these features will make their way into the final public version of iOS 7. Instead, the hidden settings are likely to be used and tested by Apple internally to not only tweak iOS performance but explore future features. Some could, however, be adopted as public options to allow for further customization of the user experience.
[ 97 comments ]

Are any of Apple's ideas not copied from an existing jailbreak tweak.


When iOS blogs presented popular JB tweaks they were literally begging for Apple to implement them. Now that they are implemented, we hear crap like this.

And why does everything has to be original? What's next, you won't even consider buying/umpgrading to iPhone 5S/6 because it has an antenna, display and microSIM card, all things which were previously available?

Is the option to select which apps handle which functions.

Are any of Apple's ideas not copied from an existing jailbreak tweak.


I should say that this is a great thing. Apple taking note of what the end users ACTUALLY want rather than telling them. Kudos to Apple in my opinion. Saw an article accusing Apple of copying the best bits of all the other OS. Hell yes please! How can that be bad for the end user?
Score: 4 Votes (Like | Disagree)

benjones
Are any of Apple's ideas not copied from an existing jailbreak tweak.

Original. Not.
Score: 4 Votes (Like | Disagree)
Read All Comments

Monday August 2, 2021 2:12 am PDT by Sami Fathi
For future iPhones, iPads, and MacBooks, Apple plans to use smaller internal components in an effort to increase the size of the device's battery, according to DigiTimes. Image Credit: iFixit Specifically, Apple plans to "significantly increase the adoption" of IPDs or integrated passive devices for the peripheral chips in its products. These news chips will be slimmer in size and allow for...
Read Full Article • 72 comments