Apple has announced the winners of its annual Apple Design Awards at WWDC, highlighting an array of apps from utilities to games on both iOS and the Mac. Apple's Design Awards were created to recognize apps that "raise the bar in design, technology, and innovation." 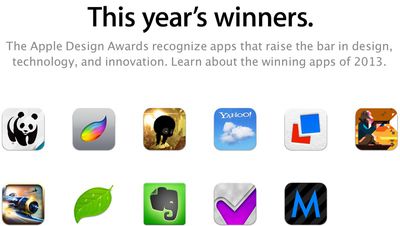 iPad Only
- WWF Together
- Procreate

This year's awards also include two apps from student developers. Finish is a streamlined task manager designed to help users organize to-dos into tasks, while mosaic.io allows users to display a photo mosaic across two or more iOS devices.

Love the Yahoo! Weather app but the new icon sucks.


Funny - I'm glad they changed the icon - I think it's much better. Oh well, one man's meat's another man's poison and all that.:)
Score: 4 Votes (Like | Disagree)

chasemay
Coda is the best.
Score: 4 Votes (Like | Disagree)

zed1291
Evernote is one of the worst apps I have on my iPhone. The only reason it hasn't been deleted is copy paste doesn't work good in the app and it's too much work to get the previously entered notes in another app. But it looks awful!
Score: 3 Votes (Like | Disagree)

haruhiko
Yahoo weather trumps all other weather apps on the App Store. ;)
Score: 3 Votes (Like | Disagree)

daveheinzel
Good to see Yahoo Weather on the list. It's amazing - almost to a point of suspicion - how many similarities it shares with iOS 7.
Score: 2 Votes (Like | Disagree)
Read All Comments