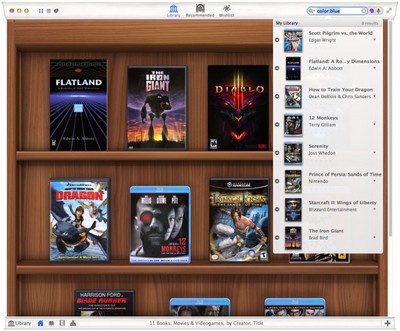 Delicious Library is a media and gadget cataloging application that hasn't been in the news in recent years, but garnered very positive reviews upon its first release. The first version and its followup both won Apple Design Awards for Best Mac OS X user experience in 2005 and Best OS X Leopard Application in 2007. The flashy design elements were notable at the time, and is likely to have inspired a "generation" of Mac App developers as well as (indirectly) Apple's own iBooks iOS app.

One of the most notable features of Delicious Library's initial release was the use of Apple iSight camera as an inexpensive barcode scanner, so users could scan and inventory their products. As a followup to that feature, the company will be releasing an iOS app that offers this behavior using the iPhone's camera, allowing quick mobile cataloging.

According to Delicious Monster CEO Wil Shipley, Delicious Library 3's major shift is from being just a "know what you own" app to a recommendation engine based on the products you own:

We're centered on the idea of your books (movies, cds, whatever) being an aspect of your unique personality, and our app does neat things with your personal data—like give you cool graphic summaries, or really good composite recommendations.

Aside from the new recommendation engine, Delicious Library 3 will offer a 3D cover-view interface, interactive charts mode, flexible smart shelves, and more. It should be available in the Mac and iOS app stores soon.


Back when iBooks was released, there was quite a big (http://www.funkyspacemonkey.com/developer-delicious-library-accusing-apple-stealing-gui-ipad) upset (http://everythingapple.blogspot.se/2010/01/apple-steals-ibooks-interface.html) over the fact that iBooks "stole" Delicious Library's UI, since DL came out first. It's actually quite funny to see it come full circle with people accusing them of ripping off Apple.
Score: 30 Votes (Like | Disagree)

Sky Blue
Don't really have much use for this nowadays. DVDs/BluRays are all boxed up after being ripped and put into Plex. Software is from App Store/Steam. Music is from/in iTunes/Spotify etc.
Score: 6 Votes (Like | Disagree)


Except that it's the other way around, they've had the shelf interface for years.
Score: 5 Votes (Like | Disagree)

baleensavage
Hopefully, they've gotten the issues with Amazon dealt with so that they can have a companion iOS app to go with it again. Without an app, it's old news. I don't want to have to bring all my books, etc. to my desktop, when I can scan them right from my iPod touch. But I will gladly drop all the terrible cataloging iOS apps I've got now, for an all-in-one that works as well as Delicious Library always did on the desktop.
Score: 4 Votes (Like | Disagree)

It is good for cataloging for insurance purposes.

In addition, if you have alot of books/movies/music/games, etc., it saves you from purchasing something, getting home, and realizing you already own it.
Score: 3 Votes (Like | Disagree)
Read All Comments