An Apple Pop-Up Museum is set to open this weekend, at the Vintage Computer Festival Southeast in Atlanta. The museum will feature a look at Apple products throughout the years and will include several rare Apple and pre-Apple artifacts like the original Lisa and the Xerox Alto.

The museum is organized into a series of different rooms, with each different section dedicated to a different era in Apple's history. 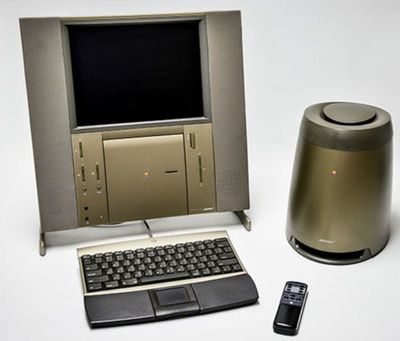 A rare 20th Anniversary Mac
Steven Hackett of 512 Pixels posted a detailed preview tour of the museum earlier this month, pointing out several highlights along with tidbits from Lonnie Mimms, the man who created the Apple Pop-Up Museum.

If the Apple I is Genesis, then a little garage in Los Altos is Eden. The garage is recreated in Mimms' Apple Pop-Up Museum, with large prints of what the workstations looked like. In the middle of the room, on a white stand, under glass, is Mimms' Apple I.

The next two rooms down the hallway are a prime example of how simple — yet powerful — the displays in this exhibit are.

The first one is all about the Apple II — the machine that launched Apple into its first giant wave of success. The room features the machine of course, but also the first Disk II and controller card. The back wall of the room is an art piece made of old disks, and on the wall hangs examples of Apple II logic boards and designs.

Hackett goes on to spotlight other early Apple products like the MacColby, an original 128k Macintosh that plays the first game ever made available for the system, and the ultra rare 20th Anniversary Mac. Hackett's account of the museum provides a fascinating overview of the contents of the museum for Apple enthusiasts who cannot make it to Georgia.

The Apple Pop-Up Museum will be open on Saturday, April 20 and Sunday, April 21 2013 and will take place at the Kings Market Shopping Center. Attendees will need to pay a $10 admission fee for a single day or $15 for both days.

Silvereel
Link to photos below

Well, I put on my 'Hello, I'm a Mac' shirt, and made my way down to the Apple Pop-Up Museum today. I've got to say, it was a blast! Despite being inside what used to be a Comp-USA, they've really turned it into a really nice place. It really did have the quality you'd expect from a museum. They even had a bench to sit on while admiring a massive portrait of Steve!

It boggles my mind that they're only doing this for a few short days. It looks like they put a ton of work into it. They might not have had every Apple device under the sun, but they had everything you need to know about. I was still a bit disappointed that I didn't get a chance to look at a Pippin, but I digress...

I took quite a few photos, so feel free to look them over. I set up a bit of a gallery here (https://skydrive.live.com/redir?resid=EB97C7860F2A73C3!9924&authkey=!AOoQdcVgjZ4TEeE). Some of them aren't the best, because of lighting and the plastic over displays, but you'll get the picture. There's also a temporary tattoo they handed out in there ;)

Anyways, it's well worth your time if you get a chance to check it out. It's tastefully done, and Apple's products are well worth admiring. It really does make me wish that Apple had a museum of their own.

On a related note, I did check out the rest of the Festival, and got a chance to look at some really arcane gear; teletype machines from the '60s, a tic-tac-toe game from 1961, Altair 8800s, and even a table full of MSX computers and accessories. I also listened to David Greelish's talk on the similarities between Steve Jobs and Walt Disney, which was pretty interesting, too.

Did I mention I came within inches of a real Apple I? Yeah.
Score: 3 Votes (Like | Disagree)

Garrod
Sadly that's a bit too far for my budget to stretch to travel that far. Now give me a pop-up book with that sort of stuff in and I'm sold!
Score: 3 Votes (Like | Disagree)

DTphonehome
Are people really going to need TWO days for this? It's not Disney World.

"That iMac was exhausting, kids! Let's do the rest tomorrow!"
Score: 2 Votes (Like | Disagree)

Are people really going to need TWO days for this? It's not Disney World.

"That iMac was exhausting, kids! Let's do the rest tomorrow!"

ZZ Bottom
Trying to decide between the two-day discount or the season pass!
Score: 1 Votes (Like | Disagree)

Silvereel
Heading down there tomorrow :D Only about 45 minutes to an hour from where I live, so I'm lucky!
Score: 1 Votes (Like | Disagree)
Read All Comments

Tuesday December 6, 2022 2:31 pm PST by Juli Clover
Apple is aiming to launch an Apple-branded consumer-oriented vehicle by 2026, and its goal is to hit a price point under $100,000 to make the car appeal to a wider range of customers, reports Bloomberg. Apple initially planned to design a car that might look similar to Canoo's Lifestyle Vehicle, where passengers could face one another in a limousine-style car with no steering wheel or...
Read Full Article • 310 comments