After running into a downed power line in 2008, Jason Koger lost both of his hands. Five years later, he has almost a full range of motion after being the first double amputee to be fitted with prosthetic hands that can be controlled by an iPhone app, reports CNN.

The i-limb ultra revolution, made by Touch Bionics, is the newest in prosthetic technology. According to the developers, it is the closest thing to a real human hand. 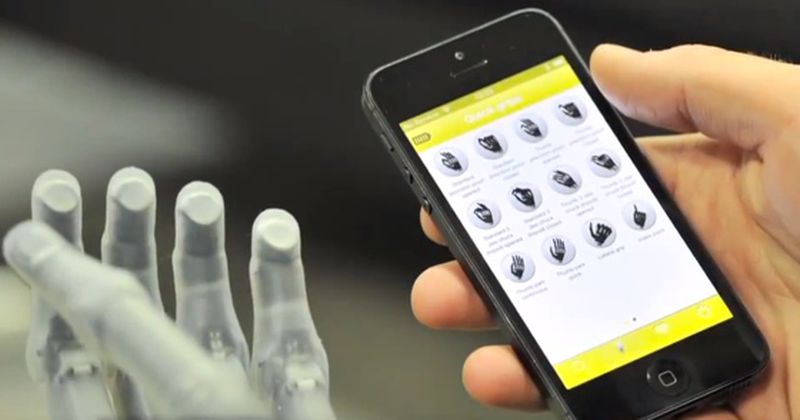 With the i-limb ultra, your prosthesis looks and moves more like a natural hand than any other powered prosthetic hand. Each finger bends at the natural joints so that it can accurately adapt to fit around the shape of the object you want to grasp.

Unlike standard prosthetics, the i-limb features five individually powered fingers, which includes a thumb that is fully rotatable. The wrist rotates as well, and the app allows for 24 additional grip patterns like a tripod grip to pick up a pen. With the hand, Koger can do things like use tools and shake hands.


Koger, who has even customized a grip pattern of his own, detailed what he thinks of the technology.

You know, I love it. These have motorized thumbs. it has an app that comes with it so that you can do several different grasp patterns it gives me the ability to do more things that I want to do.

He goes on to say that for the first time in five years, he can hold onto his daughter's hand. "I can't tell you what a gift that feels like."

pancakedrawer
He can finally hold it correctly!
Score: 5 Votes (Like | Disagree)

After running into a downed power line in 2008, Jason Koger lost both of his hands. Five years later, he has almost a full range of motion after being the first double amputee to be fitted with prosthetic hands that can be controlled by an iPhone app, reports CNN.

He needs at least one hand to control the iPhone but both of his hands are controlled by the iPhone... am I missing something?

This reminds me of this scene in Futurama (//www.youtube.com/watch?v=vFuq1Mhq-qg).
Score: 4 Votes (Like | Disagree)

Skika
That must be very handy for him.
Score: 3 Votes (Like | Disagree)

He needs at least one hand to control the iPhone but both of his hands are controlled by the iPhone... am I missing something?
...

The prosthetics seem to be automatically controllable by his nerve endings. All the app allows him to do is customize/swap grip patterns. He's able to operate the app while wearing a capacitive finger sleeve.

fiveainone
In before Skynet comments..
Score: 2 Votes (Like | Disagree)

I'd love to know some more about the tech behind it... off I go to google it!
Score: 2 Votes (Like | Disagree)
Read All Comments