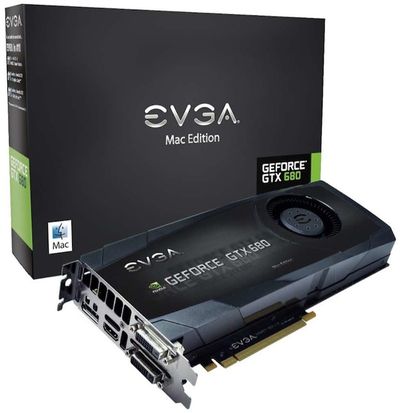 EVGA did not announce pricing or a launch date in its press release, but Newegg.com is currently listing a $599.99 price tag and a launch date of April 8. The is compatible with Early 2008 Mac Pro (MacPro3,1) and newer models with PCI Express 2.0, and requires OS X 10.8.3.

What's with all the recent Mac-compatible GPUs? This makes me quite happy.

They need them for the new Mac Pros.

It doesn't take years to put a motherboard in a box - no matter how nicely you CNC mill the box.

Apple gave up years ago by not putting enough people on the Mac Pro to actually deliver anything. Ever.

Apple needs to make giving up official. People will move on to PCs and everyone will be better for it.

Use what you like and get a PC if you want / need one. Likewise, let other people get what they want and don't assume it's a PC.
Score: 6 Votes (Like | Disagree)

"5. OpenGL 3.2 (4.3 in Windows) Support - Support for the most widely-used open graphics standard in the world."

It IS sad given the total lack of support of most games for OpenGL in Windows and YET Windows still has better OpenGL support than the Mac does when it's the Mac's primary 3D system. There is simply NO EXCUSE for Apple, IMO. They're so busy making iPads they don't (and really never have for a LONG time) given a crap about modern computer standards. Behind on USB 3, behind on OpenGL, behind on the Mac Pro PERIOD.... awful, just AWFUL computer support anymore.
Score: 5 Votes (Like | Disagree)

another money grab attempt by a third party hardware manufacturer


Yes, how dare companies try to give us goods and services in exchange for money :)

Seriously though, it's interesting to me that 2 companies released Mac Pro cards in such close proximity. Could this be a sign we're getting an actual new Mac Pro soon?
Score: 5 Votes (Like | Disagree)

keysofanxiety
All this hype, only for Apple to release the new Mac Pro with a soldered graphics card ;)
Score: 5 Votes (Like | Disagree)

I don't know either. Was hoping it would be 3g at that price. Maybe the manufacturers are considering the power supply usage.

"5. OpenGL 3.2 (4.3 in Windows) Support - Support for the most widely-used open graphics standard in the world."

The sincere lack of technological knowledge here astounds me but also reminds me that Apple is not just a computer company, but more peripheral.


Thank goodness your here to wow us with your superior technological knowledge! Please help us Sy7ygy!
Score: 3 Votes (Like | Disagree)
Read All Comments