Apple Cutting iPad Mini Shipments in Q2 2013 to Prepare for Next Generation? 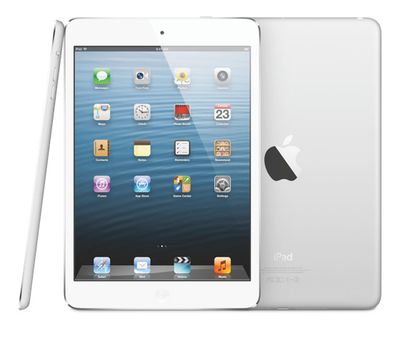 Digitimes is reporting that Apple is set to cut shipments of iPad mini in the second quarter of 2013, according to its industry sources.

The cut is said to be a 20% reduction for the month of April, with steeper cuts potentially following in the remainder of the quarter, although the report does not specify whether the cuts are relative to previous production plans or to current-quarter output.

Apple has reportedly cut its shipments of the iPad mini to between 10-12 million units for the second quarter of 2013, according to industry sources. The figure is based on shipment information given from multiple sources who provide various components for Apple's iPad mini.

The decrease may be as high as 20% on month during April, the sources noted, and may continue to slightly decrease throughout the quarter to bring total shipments of the iPad mini to as low as 10 million units during the quarter.

The move comes two weeks after Apple started offering refurbished iPad minis on sale for the first time and may be tied to Apple devoting resources to the production of the next-generation iPad mini. The report claims, however, that competition from 7-inch tablets may also be playing a role.

Rumors of production cuts for Apple products are always difficult to put much stock into, as Apple's internal build plans are fluid as the company manages its nimble supply chain to adjust for demand and product transitions.

Apple CEO Tim Cook has also cautioned against reading too much into supply chain reports, noting that the company has multiple sources for many components and that yield rates may vary over time, meaning that supply chain reports typically offer incomplete pictures of Apple's production situation.

DisplaySearch analyst Paul Semenza speculated that, based on supply chain data, the next-generation iPad mini would be released in the third or fourth quarter of 2013. Reliable KGI Securities analyst Ming-Chi Kuo has also predicted a third-quarter release for the next iPad mini.

The next iPad mini has been rumored to include a Retina display with a resolution of 2048 x 1536, which would give it the same number of pixels as the full-sized iPad but with a higher-density 324 pixels per inch. However, iMore's Rene Ritchie, who has also been relatively accurate, has predicted earlier this month that an interim spec-bumped iPad mini could launch in April and claimed that a Retina display iPad mini doesn't "sound imminent."

jontech
Credit card is waiting for that retina version

For me, yes. I read e-books and surf the net on a tablet. High-rez displays are far more important for those two tasks than the OS or ecosystem.

Exactly. If a tablet is used to READ, as in, READ BOOKS, then a very small fraction of time is spent interacting with the OS.

Another point is that with Android it is much easier to manually transfer large numbers of eBooks and PDFs. Just drag and drop a whole directory of thousands of files organized in a deep hierarchy. With Apple, you have flat organization in iTunes or iCloud. That's a huge compromise required to use Apple's "ecosystem".
Score: 4 Votes (Like | Disagree)

GREEN4U
Man Apple needs to come out with more than 1 new iPad, iPad mini, and iPhone a year. Does anyone remember when they were a computer company?
Score: 4 Votes (Like | Disagree)

Can we stop regurgitating DigiTimes' "news" please? How many times do they have to be wrong before sites smarten up and start ignoring them??


Do you actually use or plan on using one? Just asking since I also feel the urge to complain about the Mac Pro not coming out even though I'm set on keeping my 2008 one for a long time ;)
Score: 4 Votes (Like | Disagree)

Clearly, this is because nobody wants the iPad mini over those hot 7" tablets with superior specs. /s
No really, the next generation iPad mini is obvious. Hopefully with a retina display?
Score: 4 Votes (Like | Disagree)
Read All Comments