Infographics released by in-flight Wi-Fi service Gogo (via CNET) reveal that iOS devices continue to dominate customer use with an 84% share, although Android use has grown significantly in the last two years. 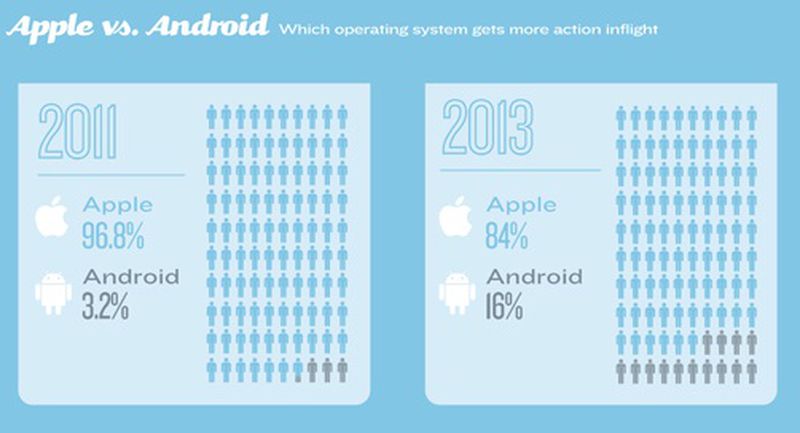 As further evidence of the post-PC trend, the majority of access - though only just - is on tablets, accounting for 35% of usage compared to 33% for laptops. When it comes to iOS devices, iPads are used more often than iPhones. 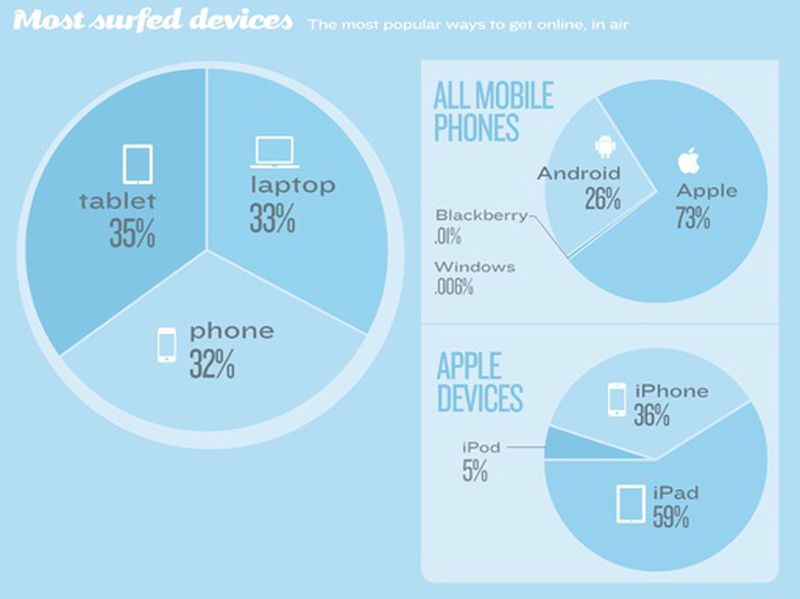 Web-browsing is the top activity for Gogo users, with email, social networking, news and weather completing the top five slots.

Gogo is available on Air Canada, Air Tran, Alaskan Airlines, American Airlines, Delta, Frontier, United, US Airways, and Virgin America, with over 1,500 commercial airplanes and over 5,000 business jets equipped for the service.

drewface
That's because Android users don't like to pay for anything
Rating: 5 Votes

turtlez
this is hilarious. Android, cheap quality and minimal existence in premium places.

I hate the "post-PC" term. Tablets become more like PCs every day, so eventually they will essentially be the same thing. But that just means that the tablet is becoming the PC, not that the PC is going away. And even so, traditional desktop computing will always be relevant even if it is less popular.


The term will die out. People just use it at the moment because there is a clear distinction between tablet and PC for now. Just an easy way of showing people where the future is going.

Android owners, overall, are less affluent with smaller disposable income. They won't be flying as much as their jobs and lifestyle keep them from doing so. And those that do likely don't realize inflight wireless is even available, or can't afford the fee for same, small as it is.


or they are too busy spending hours customising their home screen only to change it again next week. They remind me of the people who get silly little tattoos on their ankle, like a heart or a butterfly then regret it a year later.
Rating: 3 Votes

ReallyBigFeet
Android owners, overall, are less affluent with smaller disposable income. They won't be flying as much as their jobs and lifestyle keep them from doing so. And those that do likely don't realize inflight wireless is even available, or can't afford the fee for same, small as it is.

MonkeySee....
Its amazing how many Android devices have reportedly shipped but any sort of useful data coming back shows that nobody is using them.

Ventilatedbrain
I've got a theory about this are you ready ? Android users brag so much about themes and launchers because that's all they ever do on them , who would want to save their credit card details on a phone that's sneezes malware ?
And
I'm curious to hear from someone who switched ecosystems ! I tried it and had to go back 2 weeks later
Rating: 2 Votes

urbanslaughter1997
Could they add a few more shades of blue to those charts? Those are some of the worst charts I've ever seen. I had to turn the contrast up to eleven just so I could read them.
Rating: 2 Votes

iPusch
Most Airlines do not even support wifi on flight...
That's the only reason I don't use my iPhone / iPad that much up there^^
Rating: 2 Votes

weing
Captain Obvious here.
Anyone ever try to actually open up and use your laptop in a coach seat?

Easy to see why iOS or android would dominate inflight usage.
Rating: 1 Votes

spb3
so how much of the browsing information are they tracking? privacy?


Web-browsing is the top activity for Gogo users, with email, social networking, news and weather completing the top five slots.

I'm sure you'll get attacked eventually by someone who will take your comment personally.


They they should not get an Android if they are ashamed of it. :p

I certainly did not say all of them are like that, just tend to be. :)
Rating: 1 Votes
[ Read All Comments ]