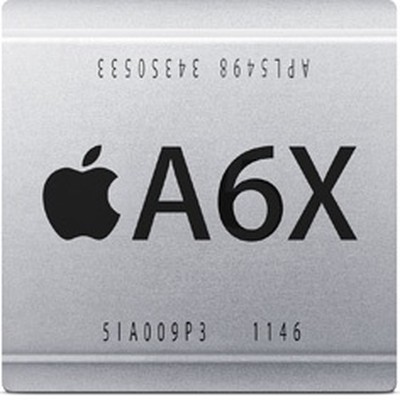 Reuters reports that Intel's move into contract manufacturing of chips for other companies suggests that Apple could become a future customer with its A-series chips for the iPhone and iPad, potentially reducing its reliance on arch-rival Samsung as a supplier.

A source close to one of the companies says Intel and Apple executives have discussed the issue in the past year but no agreement has been reached.

Intel has in the past always designed its own computer CPUs, which PC manufacturers like Apple then buy. Intel had previously expressed interest into moving toward some contract or "foundry" manufacturing of chips, although had indicated that it would be most interested in projects based on its existing technology.

But the growing trend away from PC and towards mobile devices continues to threaten Intel's core business, apparently prompting the company to more heavily consider acting as a foundry for distinct chip designs from third-party companies.

Intel spokesman Chuck Mulloy said the chipmaker is in constant discussions with Apple, which buys its PC chips, but he would not comment on negotiations about a potential foundry relationship. An Apple spokesman declined to comment.

Pat Becker Jr, of Becker Capital Management, believes the move would make sense for both Intel and Apple. "If you can have a strategic relationship where you're making chips for one of the largest mobile players, you should definitely consider that. And for Apple, that gets them a big advantage."

Jsameds
My inner fanboy is thinking "The less money that goes to Samsung the better".
Score: 16 Votes (Like | Disagree)

XboxMySocks
Oh man this is exciting. Lose the Samsung dependency! :)

The change in opinion around here on Intel from the days of the switch from PPC to now is really incredible.


In this pantomime, the Bad Guy changes a lot. Sometimes it's IBM, or Microsoft, or Intel. Today it's Samsung.
Score: 5 Votes (Like | Disagree)

Oh man this is exciting. Lose the Samsung dependency! :)


How is that exciting? :confused:

Sadly its only a very, very, very small dent. Samsung makes billions from everything else.

I hope so, x86 has been the slowest and most unproductive arch of the 21st century. Look at how cutting edge intel has been since Apple signed on with them. 3 years and still waiting on something other than menial bumps for the macpro, why because of intel's lack and or desire to raise any bar. although no need to when your a monopoly.


I'm fairly certain this is Apple's fault and not Intel's. Sandy Bridge E has been around for some time. Ivy Beidge E is around the corner.
Score: 5 Votes (Like | Disagree)
Read All Comments

Wednesday June 9, 2021 8:23 am PDT by Joe Rossignol
While there are many great new features in macOS Monterey, several of them are not available on Intel-based Macs, according to Apple. On the macOS Monterey features page, fine print indicates that the following features require a Mac with the M1 chip, including any MacBook Air, 13-inch MacBook Pro, Mac mini, and iMac model released since November 2020:Portrait Mode blurred backgrounds in...
Read Full Article • 838 comments

Friday June 11, 2021 1:13 pm PDT by Joe Rossignol
On his newly launched Front Page Tech website, leaker Jon Prosser has shared renders showing off the alleged design of the next-generation iPad mini, which he says are based on schematics, CAD files, and real images of the device. In line with details shared earlier this month by Bloomberg's Mark Gurman and Debby Wu, Prosser claims that the new iPad mini will feature slimmer bezels around...
Read Full Article • 152 comments