Taiwanese newspaper Economic Times reports [Google translation, via Mac Otakara] that Apple is lining up suppliers for its next-generation MacBook Air for launch in the third quarter of this year.

According to the report, the MacBook Air will not only be receiving internal upgrades to Intel's new Haswell platform but also a "facelift" with new external features, including the possibility of a Retina display. The report also claims that suppliers will begin shipping components to Apple's assembly partner Quanta during the second quarter of the year. 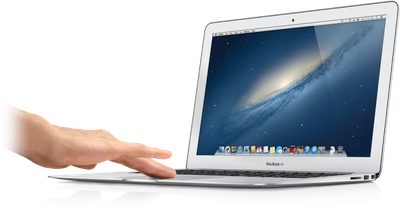 KGI Securities analyst Ming-Chi Kuo had previously included an updated MacBook Air in his 2013 Apple product roadmap, predicting a late second quarter or early third quarter launch for the device. He did, however, indicate that the update would not include Retina displays, which would require substantially more battery power than the current displays and likely force a redesign to also accommodate a somewhat thicker display assembly.

Pricing remains another question for Apple, as the MacBook Air is the company's entry-level notebook and Apple will likely be very hesitant to raise that floor. But while Apple's Retina MacBook Pro models carry significantly higher pricing than their non-Retina counterparts, a significant amount of that cost is related to a shift to solid-state drives, which are already used in the MacBook Air.

Gemütlichkeit
Call me crazy but the Air doesn't need retina or any of the performance hits when it comes to displaying that high of a resolution on a portable machine.

That would almost require a dedicated GPU, and would provide too much cross over with the Air and Pro w/ Retina.

Builddesign
...And get rid of that enormous bezel :eek: !
Score: 10 Votes (Like | Disagree)

DTphonehome
I just hope they add more Thunderbolt ports. So I can plug in all my Thunderbolt accessories. The ones I use all the time.
Score: 8 Votes (Like | Disagree)
Read All Comments