Just over a year after TwelveSouth released its PlugBug Mac and iDevice charger, it has gone international. The new PlugBug World is the same as the original, but includes five swappable prong adapters for use in the UK, Continental Europe, Australia, New Zealand, North America, Hong Kong, Singapore, China, Japan and a number of other countries. 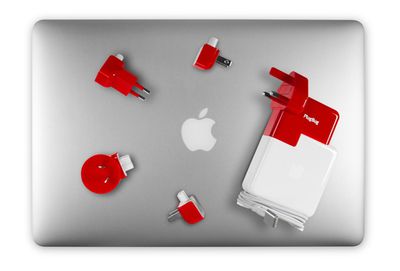 PlugBug World is an international version of the popular Twelve South PlugBug. PlugBug World brings the dual charging convenience of PlugBug to Mac users everywhere. PlugBug uses the clever trick of attaching to any Apple MacBook Power Adapter by replacing its attached plug or extended power cord. When snapped into place, PlugBug not only allows for worldwide charging of MacBook, but also provides a separate 2.1-Amp USB charger for iPad/iPhone. Once attached, simply select your local plug, or use your extended cable, to power both your MacBook and iPad or iPhone from a single outlet. This powerful accessory is a lifesaver in locations where finding multiple wall outlets can be a challenge, and where charging your MacBook and iPad quickly is mission-critical to your next meeting or presentation.

I can't charge my iPad and Macbook both at full AC charging current using the Travel Kit. Can you?
Score: 6 Votes (Like | Disagree)

Davmeister
I have to say I do like the solidity and design of our (British) 3 prong plug compared to others...even if it does stick out a bit
Score: 4 Votes (Like | Disagree)

I don't get it. Why can't you just charge your idevice from your laptop's USB?

ovrlrd
The question people should be asking is: Can you now plug a PlugBug into another PlugBug that is plugged into a power adapter? Or how about a chain of them?
Score: 2 Votes (Like | Disagree)

nawazsumar
Do they sell this without the plugs at all. Surely you have your own plug bit from your power adaptor you want to add this too. Sure its white but its the same?
Score: 2 Votes (Like | Disagree)

Yes, I understand what "only goes in one way" means :rolleyes:

I just mean that I'm hard-pressed to think of any reason (other than the poor design mentioned above) that you'd actually *want* to plug it in upside down.

You may have something plugged into one of the plugs in a 2-plug socket that is big enough that it impedes one way of plugging something into the second socket, but if you were to turn it upside down, it would still plug in.

Or, let's say that you have a power strip plugged into that bottom socket, and it can't be unplugged for some reason (assume all of the plugs on the strip are full). You have a battery charger for a camera you need to plug in, and normally, the charger faces down. plugging it into the top won't work, because it runs into the bottom plug. Flip it upside down, and you're golden.

I think what he's saying is this plug adapter has the two slanted pins mirror to the Apple plug adapter*. So with the Apple Adapter the inserted in to the wall the power brick hangs below the point. With this one it would stand up above the power point.

Given our plug isn't reversible but it's seems the Apple plug adapter and plugbug plug adapter are interchangeable then buying a plugbug here might be useful where you wish our plug was reversible. Like the US/EU one is.

*by plug adapter I mean the lump of plastic with the pins, not the lump that has the transformer in it.

Very true. That would come in handy, and surely would have if it existed for some other things when I lived there.

The only thing I have a concern about is that, again, when I lived there (1995 - 1997) is that while we had the adapters that helped out, the voltage couldn't be swapped, so I'm assuming autoswapping or something similar is built in. I fried my razor when I was down there, because while I was able to plug it in, it couldn't swap from 110v to 240v, and wore out the razor.