Two hit games arrived for Mac today in Batman: Arkham City Game of the Year Edition and The Witcher 2: Assassins of Kings Enhanced Edition and are now available in the Mac App Store.

After being announced for Mac in October, Feral Interactive has brought Arkham City to Mac a year after its release on consoles and a year after the predecessor Arkham Asylum was released in the Mac App Store. 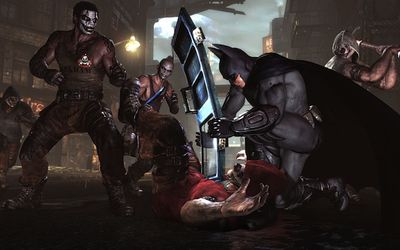 A year after the events of Batman: Arkham Asylum, Quincy Sharp, the new mayor of Gotham, has turned its slums into Arkham City, a terrifying open-air prison where violent thugs and insane super-villains are incarcerated within heavily fortified walls.

When Batman is imprisoned alongside Gotham’s most notorious, he must discover Arkham City’s true purpose before it’s too late. This intense, atmospheric sequel to Batman: Arkham Asylum plunges Batman deep into a gothic nightmare from which he will need all his wits, gadgetry and skill to escape.

The Game of the Year Edition includes all the DLC that hit the consoles for no extra cost, including the Harley Quinn's Revenge story mission, multiple skins and Challenge Map packs. Arkham City is going for $39.99 in the Mac App Store [App Store Link] and its minimum system requirements are a 2.0 GHz processor, 4 GB of RAM, a 256MB graphics card and 16GB of harddrive space.

The other big release is The Witcher 2 which, unlike Arkham City, comes from original developer CD Projeckt RED and is on sale right now for $19.99 [App Store Link]. It arrives eight months after arriving on Xbox 360 and a year and a half after it was released on PC.

Play a game where your choices really matter and where you affect the fate of individuals, communities, and entire kingdoms. Fight blood-thirsty monsters and navigate a web of schemes, lies, and political intrigue in one of the best looking games ever to come to Mac.

You are Geralt of Rivia, a witcher, a member of a mysterious caste of professional beast-slayers created through brutal training and mutation. Witchers specialize in tracking down and killing monsters. Long gone are the days when beasts lived near human settlements in every forest and cave, and the folk of the Northern Kingdoms held witchers in high regard. The age of elf and dwarf massacres has come, a time when men rival monsters in the evil they do, a time when mutated witchers are regarded as dangerous outcasts, neither human nor nonhuman. Amidst this chaos, Geralt is drawn into a bloody conspiracy. Accused of killing a king, the witcher embarks on a solitary quest to clear his name and uncover the mysteries of his past.

The Witcher 2 has been heralded as one of the best RPGs in the past could years and contains all the enhancements and DLC that the Xbox 360 version contains. You can check if your Mac meets the requirements at The Witcher website. The minimum specs require OS X 10.7.5 or later, an Intel Core 2 Duo processor, 4 GB RAM, GeForce GT 650M 512 MB, Radeon HD 5770 1 GB and 25 GB free HDD space.

xxgilxx
Sure I'm gonna get a copy of this when I can get a console version for 15 bucks. AC is an awesome game though...
Score: 4 Votes (Like | Disagree)

Call me pedantic, but spec requirement is technically possible yet not plausible. Surely not for Mac.

Which Mac that have Core 2 Duo AND Geforce 650M or even Radeon 5770?
Any Mac with C2D wouldn't have enough GPU power to run those games, and any Mac with 650M or stronger already on Core i5 or i7. Confusing, no?
While on PC it's still possible to pair C2D with geforce 680.

It's not so much meant to be reflective of a particular machine, just that the CPU requirements are not as intense as the graphics requirements. It might be barely possible for an old MacPro that's been updated to have such a spec (i.e. old processor but new or better graphics chip - obviously it would have desktop graphics card). I'm not actually sure that's a possible machine, but as I said, I think it is more reflective that the CPU usage is not as intense as the graphics chip.

As an FYI I ran The Witcher 2 on my Windows partition on my 17-inch MacBook Pro with an i7 processor and Geforce GT 330M. It ran - it wasn't pretty, but it was playable. However, I get the impression that the OS X engine isn't quite as optimized (originally a DirectX game) and the drivers are likewise not quite optimized, so I'm not convinced it would work on my Mac side (I haven't tried even though I can download either version from GOG). I also only have Snow Leopard still.

Also note, GOG's is both Mac and Windows version, DRM-free :)

Even an old Mac Pro is faster than many Core i machines.


If you're talkin about 6 core MP and beyond then yes.
But a quad MP? It's not reallty that fast, both CPU and GPU has been crapped out by top end 27" iMac for some time now.

while a new quad MP costs what? $2500 for a West"mere" Xeon and puny Radeon 5770? And it doesn't even have any display included. I find it really hard to justify the purchase, even if I am a blinded Apple fan.
Score: 2 Votes (Like | Disagree)

Cougarcat
As far as Mac ports go, it's actually a very good deal. $40, not $50, and it's the GOTY version so you get everything. The PC GOTY version is $30 on Steam, so it's not that much more (granted, that same version will be discounted to $14 or less during the Winter sale...)


Unfortunately it's pretty much par for the course that Mac ports arrive when the PC version is in the bargain bin.
Score: 2 Votes (Like | Disagree)

iSayuSay
Call me pedantic, but spec requirement is technically possible yet not plausible. Surely not for Mac.

Which Mac that have Core 2 Duo AND Geforce 650M or even Radeon 5770?
Any Mac with C2D wouldn't have enough GPU power to run those games, and any Mac with 650M or stronger already on Core i5 or i7. Confusing, no?
While on PC it's still possible to pair C2D with geforce 680.
Score: 2 Votes (Like | Disagree)
Read All Comments

Tuesday July 5, 2022 6:57 am PDT by Joe Rossignol
The upcoming launch of Apple's redesigned MacBook Air with the M2 chip has some Windows laptop manufacturers "worried" that sales of Intel-based laptops will be negatively affected, according to industry sources cited by DigiTimes. "A Wintel brand vendor pointed out that at a price point of US$1,000-$1,500, the MacBook Air will crowd out other high-end notebooks," the report claims, with...
Read Full Article • 362 comments

Tuesday July 5, 2022 5:53 am PDT by Hartley Charlton
European Union lawmakers have approved landmark legislation to heavily regulate Apple, Google, Meta, and other big tech firms. The Digital Markets Act (DMA) and Digital Services Act (DSA) were proposed by the European Commission in December 2020. Now, collected in a "Digital Services Package," the legislation has been formally adopted by the European Parliament and seeks to address...
Read Full Article • 697 comments

Wednesday July 6, 2022 4:59 am PDT by Joe Rossignol
Apple today announced that the new MacBook Air equipped with the M2 chip will be available to order starting Friday, July 8 at 5 a.m. Pacific Time. Apple said deliveries to customers and in-store availability will begin Friday, July 15. MacRumors exclusively reported that Apple planned to launch the new MacBook Air on July 15, and the date has now been confirmed by Apple. Customers will be...
Read Full Article • 171 comments

Wednesday July 6, 2022 10:00 am PDT by Joe Rossignol
Apple today announced a new Lockdown Mode coming to the iPhone, iPad, and Mac with iOS 16, iPadOS 16, and macOS Ventura. Apple says the optional security feature is designed to protect the "very small number" of users who may be at risk of "highly targeted cyberattacks" from private companies developing state-sponsored spyware, such as journalists, activists, and government employees. Apple...
Read Full Article • 89 comments