Following last month's launch of new Mac mini models, a number of users in the MacRumors forums and Apple's support forums have cited issues with flickering on external monitors connected to their machines via HDMI. Connections via Thunderbolt/Mini DisplayPort are not affected. 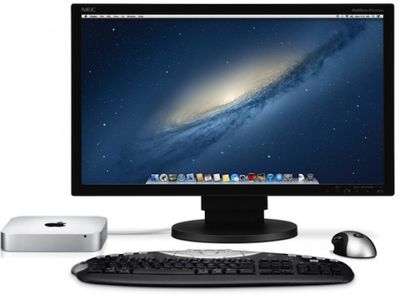 The issue seems to be a known one related to the Intel HD 4000 graphics used in the Mac mini, and Intel has now acknowledged the issue in the Mac mini and indicated that a fix is on the way. A timeframe for a fix delivered through Apple is, however, so far unknown.

We are aware of the flickering issue, and there will be a fix provided in the future. The overall flicker issue is also being addressed here; http://communities.intel.com/thread/32932

Your OEM (Apple) will provide the driver with the fix when they are done configuring our driver (that has the fix). An ETA on this is currently unknown.

Apple has begun developer seeding of OS X 10.8.3 with an emphasis on graphics drivers, but it seems to be unclear at the present time whether the current beta version of OS X 10.8.3 contains the specific fix for this issue.

jav6454
Intel should just stick to CPUs and leave the GPUs to nVidia and AMD/ATI. That's the best solution here.
Score: 17 Votes (Like | Disagree)

Best Beta Testers around. Can't wait for you folks to test out the new iMacs and find the problems to make my Rev B purchase the perfect buy! :)

dr_lha
I fixed this problem weeks ago by spending $6 on this:

3282868
Integrated graphics are ridiculous for a desktop. I'd rather sacrifice a bit of space in order to replace the card, repair it, upgrade it or simply have an independent card with its own RAM and better performance.

Mobile devices I can understand, but this obsession with "thin" iMac's and small Mac Mini's at the sacrifice of function is getting out of hand. How is Intel proposing to fix this issue? What if this had been a bad logic board w/ integrated graphics?
Score: 5 Votes (Like | Disagree)

Apple are the ones pushing for integrated GPU's. That's why there are no discrete GPU's in the rMBP 13" and MBA's.


Hardly. AMD is moving the market to APUs and Intel knows it has to do something better than their HD 4000/5000 or they will open up x86 to AMD. It's another reason for the Xeon Phi (http://www.intel.com/content/www/us/en/high-performance-computing/high-performance-xeon-phi-coprocessor-brief.html) to compete against GPGPUs and the HSA Initiative (http://hsafoundation.com/) which is founded upon LLVM and OpenCL.

Apple wants SoC to have as small a form-factor as possible while improving system performance.

The Macbook AIR is an example of where Mobile GPGPUs have room to scale down before they're able to put them back in such a thin frame. Until then, the integrated section from Intel's HD 4000 will have to do.

The moment Nvidia and AMD can put an extremely thin, low power, but dedicated discrete gpgpu in that form factor Apple will jump on it. AMD's upcoming Radeon HD 8000 series is reportedly 33% more power efficient in power, even at 28nm. AMD is moving to 20nm in 2013 and 14nm in 2014 thanks to GlobalFoundries.

The power efficiency increases and the die size drops will be win/win for Apple's thin is in all the way up to the thin doesn't matter Mac Pro.

AMD is dropping their GPGPUs pricing for the HD 8000 series by > 20% while computational improvements are up > 60% for SP and DP.

New materials will soon launch CPU/GPGPU designs producing performance and power consumption drops that will once again remind us all how amazing this industry is relative to any other in the globe.
Score: 5 Votes (Like | Disagree)
Read All Comments