Research firm Kantar Worldpanel shares its latest data on U.S. smartphone sales, calculating that a strong debut from the iPhone 5 has enabled Apple to retake the lead from Android in the race for the top platform. The report pegs Apple's share of the market during the August-October period at 48.1%, compared to 46.7% for Android.

Dominic Sunnebo, global consumer insight director at Kantar Worldpanel ComTech, comments: “The last time we saw iOS overtake Android in the US was when the iPhone 4S was released and Apple managed to retain its lead for three consecutive periods. This time we predict that Apple will beat its previous high of 49.3% and achieve its highest ever share of the US smartphone market within the next two periods.” 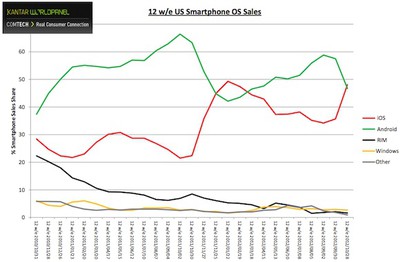 Apple has, however, found stiffer competition from Android internationally, with Android holding 60-80% share in most other markets tracked by Kantar Worldpanel. Notable areas of weakness for Apple include Brazil (0.4%) and Spain (4.0%), but the company continues to perform fairly well in countries such as the the United Kingdom (32.7%) and Australia (29.4%).

The firm's surveys of U.S. iPhone customers finds a healthy 60/40 balance between upgrade buyers and new users, suggesting that Apple is continuing to see loyal customers while also attracting new users with the iPhone 5. According to the report, 92% of current Apple users indicate that they will purchase an iPhone as their next phone.

I live in the UK and a lot of people here are ditching the iphone as the screen is way to small, im sure its only a few but the screen issue is becoming a fact of life.

ZenErik
iPhone screen is the perfect size, IMO. I wish premium Android and Windows 8 phones would have the same sized screen. Most of them are too big for me to use with 1 hand.
Score: 30 Votes (Like | Disagree)

I live in the UK and a lot of people here are ditching the iphone as the screen is way to small, im sure its only a few but the screen issue is becoming a fact of life.


I prefer to have something fit in my pocket. I do find it ironic how many Europeans complain about America's oversized waistlines, cars, homes, and televisions, yet you posted this.
Score: 23 Votes (Like | Disagree)

GenesisST
I have nothing against two strong contenders! Of course, they will overtake one another every now and then.

At this point, RIM and MS should just be included in "others". On the other hand, I welcome them for trying.
Score: 21 Votes (Like | Disagree)

Small White Car
The mirroring of the two lines is pretty fascinating. They really are fighting over the same people now.

Gone are the days when they could both gain customers away from dumb-phones and both grow at ridiculous rates. Nope, now a sale for you is literally a customer stolen from the other guy.
Score: 21 Votes (Like | Disagree)

odditie
This graph seems wrong...I'm pretty sure RIM has a negative share at this point.
Score: 19 Votes (Like | Disagree)
Read All Comments