Following word today that the iPhone 5 will launch in India on October 26, MacRumors has learned that the iPhone 5 has been approved for sale in Brazil by Anatel, the country's telecommunications regulatory authority. The approval was posted yesterday with Foxconn's factories in Brazil and China listed as assembly locations, but there is not yet any word on when Apple plans to launch the device in the world's fifth most-populous country of nearly 200 million people. 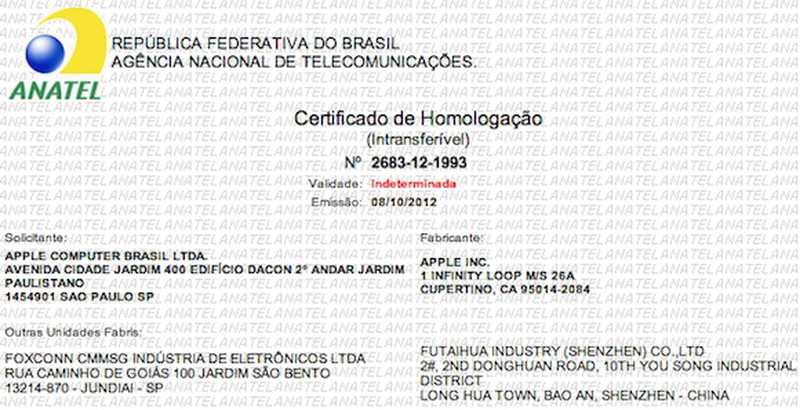 Perhaps most interestingly, the documentation filed as part of the review includes the manual for the iPhone 5 as it will be distributed in Brazil, and the section addressing Siri provides input examples in Portuguese, suggesting that the iPhone 5 will launch with support for the language in Brazil.

iPhone 5 Siri instructions with examples in Portuguese
The Brazilian manual for the iPhone 4S (PDF) provided instructions translated into Portguese, but the actual examples of acceptable input remained in English.

iPhone 4S Siri instructions with examples in English
iOS 6 already brought new and expanded support for a number of languages in Siri, but Brazilian Portuguese was not included in the list.

Apple has, however, been working hard to expand Siri's capabilities, and it appears that further increases in the language support are still part of the company's plan.

A big one for sure! Brazilian economy is stronger than ever and it's impressive how many Apple products you see around now in Brazil compared with just a few years ago...


You must live in a different Brazil than I do. Brazil is growing at a fast pace, yes, but most people still buy cars without air-bags (Latin NCAP videos (here (//www.youtube.com/user/latinncap/videos)) are scary as hell), new roads are full of holes in just a couple of days, most people have cheap dual-SIM cell-phones and the social inequality is still huge.

It's true that there are more and more people with smartphones, but... it's also true that a lot of people here buy PS3s, big screen TVs and expensive smartphones while living in 3rd world houses, but I still don't see many people using/showing iPhones probably because of two reasons: fear of assaults (extremely common in Brazil's cities) and that they're horribly expensive compared to 1st world countries (the cheapest iPhone 4S is 980 dollars compared to 710 dollars in Europe), so only the small upper-class and some middle-class with their priorities mixed up have iPhones.

Some "European-like" small cities in the southern part of Brazil (below Curitiba) may have more wide-range adoption, but certainly, out of the 200 million people that live in this country, not even 10% can afford owning an iPhone 5, that's for sure.
Score: 1 Votes (Like | Disagree)

Starship77
Siri in Portugues will be great!

I don't mind using Siri in english, but the problem comes when I need to send a message to my brazilian friends. Even if the person knows english well, it can be very weird to use a different language to send messages to your friends in your own country, and this solves the problem! :)

I really didn't expect it so soon! Good thing Apple has a lot more love for Brazil these days. Now, my only wish is official Apple retail stores! :rolleyes:

just wondering what percentage of those 200 million people is apple's target?


A big one for sure! Brazilian economy is stronger than ever and it's impressive how many Apple products you see around now in Brazil compared with just a few years ago...
Score: 1 Votes (Like | Disagree)

needfx
just wondering what percentage of those 200 million people is apple's target?
Score: 1 Votes (Like | Disagree)