Following last week's open letter from Tim Cook in which he promised that Apple "will keep working non-stop" until the iOS 6 Maps app meets customers' standards for quality, Apple has indeed been making improvements to the service. While there is certainly a ways to go, it is clear that the company is indeed moving quickly to address issues and improve coverage for the flagship 3D mapping and imagery features in the app.

While improvements have been ongoing, MacRumors forum members yesterday began noticing what appears to be a larger set of additions to the 3D content in the Maps app, including both the satellite/aerial imagery and the standard maps. One region that was among the first to be noticed was the New York City area, with a number of improvements including new 3D imagery of the Statue of Liberty being seen. 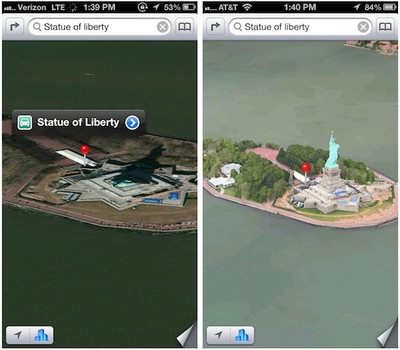 Old (left) and new (right) Flyover images of the Statue of Liberty
We've also heard from users who have experienced new Flyover imagery showing up in Honolulu, Hawaii and in the San Fernando Valley in the Los Angeles area. The changes are also affecting the standard vector-based maps as well, with users reporting new 3D buildings showing up in New York City and London.

Interestingly, not all users are seeing the new imagery, with some even doing side-by-side comparisons between devices with different results. The difference is presumably due to aggressive caching of maps and imagery, and users who are not yet seeing the new imagery should see updates in the relatively near future.

monaarts
As I have been saying since before Maps was even announced... (If they do announce the app), it will take some time for it to become better than Google Maps. Thanks for the continuous improvements. :apple:
Score: 37 Votes (Like | Disagree)

mono1980
As much as I think this whole Maps thing is ridiculously overblown, it is pretty insane that Apple didn't have major national landmarks rendering correctly at launch...
Score: 21 Votes (Like | Disagree)

sishaw
This is not what they need to be working on first...

This is just bells and whistles, Apple needs to fix the incorrect locations and missing POIs first.
Score: 20 Votes (Like | Disagree)

mnemonix
So the Statue of Liberty is rendered slightly better and the rest of the world still looks like this: 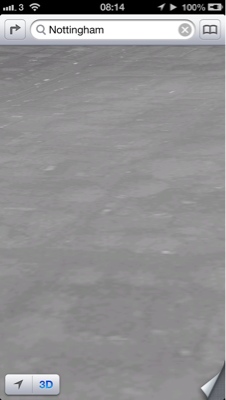 This is not an improvement, this is fiddling while Rome burns.
Score: 18 Votes (Like | Disagree)

cyks
Fixing the 3D maps and adding additional POI is all fine and dandy, but I'd rather they tackle the wrong streets and addresses.

It's an inconvenience if I were to search for a store and it didn't show up, but I could still open Safari, do a web search, and find out it's physical address.

It's a serious problem when that address takes me to the wrong spot.
Score: 16 Votes (Like | Disagree)

As I have been saying since before Maps was even announced... (If they do announce the app), it will take some time for it to become better than Google Maps. Thanks for the continuous improvements. :apple:


If only Apple had an entire year left in which they could use Google map tiles while developing their own solution... :rolleyes:
Score: 15 Votes (Like | Disagree)
Read All Comments