Reuters reports that a union representing roughly a quarter of Apple's retail employees in France has authorized a strike to protest working conditions at the company's stores. The strike is being timed to coincide with tomorrow's 8:00 AM iPhone 5 launch for maximum impact.

Demands by the SUD union, which represents about a quarter of Apple Store employees, included the installation of water fountains, providing meal vouchers and paying a thirteenth month of salary as is common at French companies.

"We're inviting all the employees who consider insufficient the advances made as part of annual labor negotiations and think Apple isn't showing enough of an interest in its French employees to join us tomorrow morning at 8 a.m. in front of the Opera Apple Store," union head Thomas Bordage said.

Other unions representing the remainder of Apple's French retail store workforce are not participating in the strike. 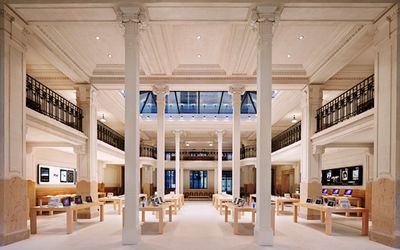 Apple's Opéra retail store in Paris
French newsmagazine Le Nouvel Observateur notes [Google translation] that the union does not know how many employees will take part in the strike, as many employees are worried that they will be fired or have their work contracts not be renewed if they participate.

Apple retail store employees in France have been wearing green wristbands this week to express solidarity and hope that an agreement can be reached, but the union suggests that a deal is unlikely before the strike goes into effect as last-minute talks have not yielded significant common ground for an agreement.

lukarak
Here in Croatia we also get 13th month pay. If we work for 13 months.
Score: 43 Votes (Like | Disagree)

brentsg
Hahahaha, 13th month of pay, water fountains, and free food eh? It sounds like things are pretty rough over there.
Score: 38 Votes (Like | Disagree)

unions + european "benefits" explain why nothing excellent ever gets done on that side of the world.
Score: 34 Votes (Like | Disagree)
Read All Comments