While Apple has yet to officially announce tomorrow's starting time for iPhone 5 pre-orders, it is beginning to look like the launch will follow the same pattern as last year with pre-orders starting at 12:01 AM Pacific Time / 3:01 AM Eastern Time.

Apple sales representatives have been telling customers asking about availability that pre-orders will begin at that time, and both Verizon and Sprint have announced 12:01 AM Pacific launches for their own pre-orders. AT&T has not yet officially released a pre-order starting time. 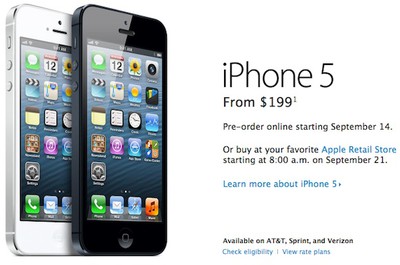 Last year, Apple was nearly 45 minutes late in starting pre-orders and experienced significant issues with online processing for quite some time after they did launch, and many users had better luck pre-ordering through their carriers.

Update 10:24 AM: Apple has confirmed to Wired that it will begin taking iPhone 5 pre-orders at 12:01 AM Pacific Time tomorrow.

gregwyattjr
I don't care what anyone says. This iPhone update was everything I could ask for and more. I cannot WAIT to get my hands on this thing!!
Score: 37 Votes (Like | Disagree)

isn't midnight pacific, 9pm eastern?! That's what i did last year while traveling in NY, i think it was 9pm eastern?! Maybe it changed?


I don't now where you live but where I am the sun rises in the East.
Score: 14 Votes (Like | Disagree)

meh :( "iPhone 4GS" would have been a more applicable name.


The iPhone5 is a nice incremental upgrade, but not enough for me to rush out and replace my iPhone4 (even after two years of using it now).

How come Apple has to reinvent the phone every damn year? This is a significant upgrade
Score: 9 Votes (Like | Disagree)

I'd rather get up at 3 than pay tax on the unsubsidized price of the phone.


I'd rather live in CA where the weather is beautiful all year round than not pay tax on the unsubsidized price of the phone.:rolleyes:
Score: 9 Votes (Like | Disagree)

I don't get what the fuss is about. iOS is very disappointing. So limiting and restrictive. Have you people seen Android Jelly Bean on the latst Samsung hardware. It puts iOS to shame and 5 years behind.

This iPhone is release has nothing new. The processor is slow compared to Samsung, the screen is small. Apple have lost their way.

I've had an iPhone for the past 4 years. This year is my last. In November my contract is up for renewal and I will be hopping to the future which is Android.


Bye bye. We will not miss you. Have fun in frag-men-tation Android land!
Score: 8 Votes (Like | Disagree)
Read All Comments