Last week, a pair of photos surfaced showing what is claimed to be the logic board for the next-generation iPhone, although relatively little information could be gleaned from the photos due to shielding covering the majority of the component.

Chinese site Sina.com now shares [Google translation] a new set of photos showing components allegedly from the next-generation iPhone, including a pair of photos showing the logic board with the shielding removed. Unfortunately, the blurry nature of the photos and the apparently incomplete stage of assembly for the part continue to limit the amount of information that can be determined.

The report claims that the original source has said that the next-generation iPhone will use the A5X system-on-a-chip found in the third-generation iPad, although that conclusion does not appear to be directly drawn from the logic board photos. Other sources have been unclear on what chip Apple will use in the new iPhone given that it does not necessarily need the full graphics capabilities of the latest iPad and will almost certainly require that RAM be included within the package rather than separately as seen with the A5X in the iPad. 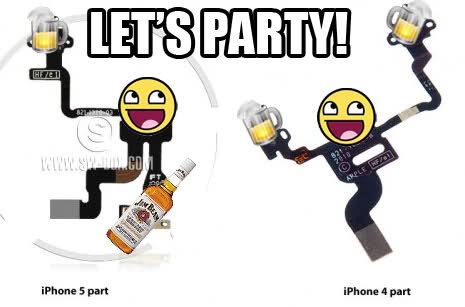 Why blurry? Were they taken in a hurry? :rolleyes:

OrangeSVTguy
Why blurry? Were they taken in a hurry? :rolleyes:
Score: 27 Votes (Like | Disagree)

Mike Oxard
I wish they'd get a Lytro camera for these pics, then we could choose which bits we'd like blurry :)
Score: 16 Votes (Like | Disagree)

AdamskiUK
'Hey, Wui Lou, you have got the next iPhone logic board, yes?'

'Why yes, Kwo Tang, yes I do. Wanna take a blurry picture and post it on the internet to annoy the Capitalist West?'

Tuesday January 26, 2021 6:14 am PST by Joe Rossignol
Apple today announced that it will be celebrating Black History Month with curated content that highlights and amplifies Black creators, artists, developers, and businesses across the App Store, Apple Music, the Apple TV app, Apple Books, Apple Podcasts, and more. The content will be featured throughout the month of February. Black Unity Sport Band has "Truth. Power. Solidarity." ...
Read Full Article • 153 comments

Apple Saw Largest Number of iPhone Upgraders Ever in Q1 2021