The latest version of Counter-Strike -- Valve's flagship series and one of the most popular PC gaming titles ever -- has arrived on the Mac via Steam. Counter-Strike: Global Offensive is the fourth title in the CS series, which has sold more than 27 million units in its lifetime.

Along with Portal 2, this is the second time that Valve has launched a flagship game simultaneously on the Mac and the PC, and the first Counter-Strike release since Steam launched on the Mac in 2010. 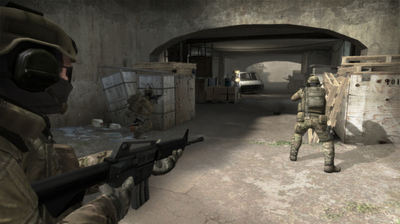 Counter-Strike: Global Offensive (CS: GO) will expand upon the team-based action gameplay that it pioneered when it was launched 12 years ago.

The Mac version has fairly liberal system requirements, with CS:GO looking for an Intel Core Duo processor with 2GHz or better, 2GB of RAM, and an ATI Radeon HD 2400 or better or a NVidia 8600M or better.

Counter-Strike: Global Offensive is available via Steam for $14.99.


I'll boggle your mind with my awp no-scope headshot.
Score: 30 Votes (Like | Disagree)


because a game being released on Mac is shock
Score: 22 Votes (Like | Disagree)

So Portal 2 wasn't a flagship game then? :P

You guys are absolutely right, fixed!

Because it's one of the most popular games of all time. The mind boggles that they've sold 27 million copies of Counter-Strike over the years.
Score: 21 Votes (Like | Disagree)

Reason077
It looks just like the old one, but taller! So much for doubling down on secrecy. Steve would never have allowed this!
Score: 16 Votes (Like | Disagree)

Congrats on the development but really how dull is another bazillion war games? Get more creative folks.

Dude, for some people, Counter Strike defines the internet: that's how big this game is.
Score: 10 Votes (Like | Disagree)
Read All Comments

Thursday September 22, 2022 1:04 pm PDT by Juli Clover
Apple today released iOS 16.0.2, addressing a number of bugs that iPhone 14 owners have been experiencing since the new devices launched. iOS 16.0.2 comes two weeks after the launch of iOS 16, and it follows iOS 16.0.1, an update made available to iPhone 14 owners on launch day. The update is available for all iPhones that are capable of running iOS 16. The iOS 16.0.2 update can be...
Read Full Article • 285 comments