The San Jose Mercury News reports that the Jobs family home in Palo Alto, California was burglarized last month, with over $60,000 worth of "computers and personal items" taken from the home. A suspect has been arrested and charged in the case.

More than $60,000 worth of "computers and personal items" were allegedly stolen, but Flattery declined to say whether they belonged to Jobs, who died last year at the age of 56, or another family member. [...]

Details about the burglary at Jobs' residence were scarce Monday. The crime was listed in the weekend report log released to the media, but police referred all questions about it to the district attorney's office. Lt. Zach Perron said that was because charges had been filed.

According to Santa Clara County Deputy District Attorney Tom Flattery, the crime appears to have been a random one, with the suspect apparently not knowing that it was the home of Steve Jobs and his family. 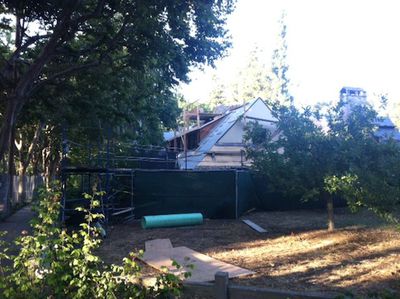 Renovation work on the Jobs family home (Source: Forbes)
The Jobs home has been undergoing renovation and it is unclear whether the family is currently living in the house while the work is being performed, but the under-renovation status of the home may have served to entice the perpetrator of the crime.

Update: The Daily has more on the incident, including a copy of the complete 32-page police report.

Wearing work gloves, McFarlin set down lawn furniture cushions outside the perimeter of the home in order to safely toss his take including: two iMacs, three iPads, one Apple TV, a Sodastream soda maker and various Tiffany jewels before fleeing away in his car.

Samsung at it again.

I do hope your joking.

hobo.hopkins
Wow, that's certainly interesting news. I hope that there wasn't anything of immense sentimental value taken in the burglary.

This in the homepage?

Sorry to ear that there was a burglery at late Steve Jobs house, but I don't really see what's the point of such an emphasis, unless they found some prototype of a product never launched?

I daresay that interesting information relating to Steve Jobs constitutes Apple news. I'm glad they've posted it; if you don't like it don't read it or comment on the thread.
Score: 16 Votes (Like | Disagree)

lifeinhd
This is disgraceful. I hope he's charged and handled appropriately.
Score: 15 Votes (Like | Disagree)


I do hope your joking.
Karma may up just need to feed her family at your house next.
Score: 12 Votes (Like | Disagree)
Read All Comments

Friday August 12, 2022 2:34 pm PDT by Juli Clover
There's just about a month to go until Apple holds its annual September event focusing on new iPhone and Apple Watch models. We thought we'd take a quick look at everything that's rumored for Apple's September event to give MacRumors readers a rundown on what to expect when the first fall event rolls around. iPhone 14 The iPhone 14 can probably be described more as an "iPhone 13S" because...
Read Full Article • 153 comments

Friday August 12, 2022 12:46 pm PDT by Juli Clover
Samsung this week launched its fourth-generation foldable devices, the $1,000 Galaxy Z Flip and the $1,800 Galaxy Z Fold. Though there's no sign of a comparable Apple foldable device on the horizon, rumors suggest prototypes are in the works, so we thought we'd take a look at Samsung's newest smartphones to see what Apple needs to measure up to when a foldable iPhone does come out. Subscribe ...
Read Full Article • 312 comments