Last week, we highlighted the unique construction barrier art in place at Apple's forthcoming Passeig de Gràcia retail store in Barcelona, Spain. The art, which consisted of tile mosaics using images of Apple iOS app icons and honoring the style of Catalan architect Antoni Gaudí, surrounded the store during the final phases of construction leading up to grand opening scheduled for this Saturday, July 28.

With the grand opening just two days away and Apple making preparations to open the store for the media and then the public, the construction barriers have come down and Cult of Mac has been able to shoot some photos through the windows of the new store. 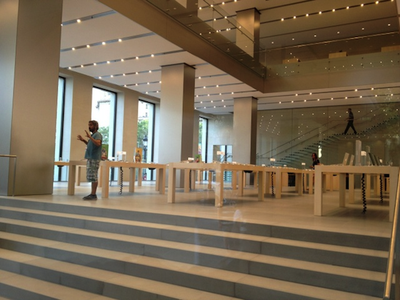 Despite the Gaudí-influenced signage promoting the store's opening, Apple appears to have maintained its usual style for the store itself, using its typical stone, wood, and metal finishes to create a clean, open feel inside the store. With three levels, the large store offers a full range of Apple products on display, as well as a large Genius Bar and a theater.

On the ground floor of the Barcelona Apple Store, about half of the available floor space is taken up with iPhone and iPad displays, spread across twelve tables in three rows. The other half of the floor is taken up by various models of MacBooks, with only a single table devoted to iMacs.

Higher up, the glass staircase leads to the Genius Bar, as well as an in-house theater.

In the basement is where Mac and iOS accessories are stored, which Apple retail employees are now hard at work filling the shelves.

Apple's new Passeig de Gràcia store opens to the public at 10:00 AM on Saturday.

3bs
I think it's time they opened stores in countries they don't have any stores in.. :(
Score: 4 Votes (Like | Disagree)

gmanist1000
The stores are so simple yet amazing.
Score: 3 Votes (Like | Disagree)

Technarchy
It's funny how Apple stores become tourist attractions in their own right because they are so elegantly designed.

Though, I still think New York's stores are the pinnacle of Apple design. 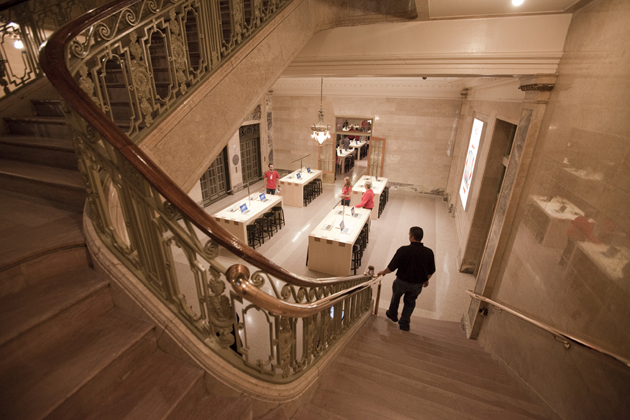 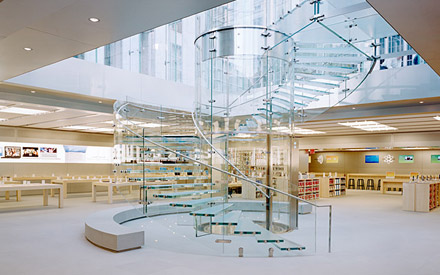 Hakone
Wow that place is beautiful. I'm so jeally.
Score: 2 Votes (Like | Disagree)

I get that point, but thanks to Northern Ireland being so much smaller than the Republic it does have a higher population density than The South. It's also not that hard for people to make their way up to Belfast from Dundalk or even Dublin now that the roads around Newry have been upgraded. The Republic is a big place. For instance, it takes nearly four hours to get from Dublin to Cork.

Scotland has a population more or less on par with Ireland, of which 2 of Apple's 3 stores are found in central Glasgow area which is also on equal terms with Dublin so with that in mind i see no reason why Apple wouldn't even consider one retail store placement in this region.

This topic has already been discussed and reasoned around i think it's inevitable but to each their own i guess.
Score: 2 Votes (Like | Disagree)
Read All Comments

Wednesday June 23, 2021 5:07 am PDT by Sami Fathi
Apple earlier today published a detailed report outlining in blatant terms the negative impact that sideloading would have on the iPhone and iPad, specifically calling out the impacts it would have on user privacy and security. Now, the company is continuing its PR push, with an executive noting in an interview that users who wish to sideload apps already have that option thanks to other...
Read Full Article • 395 comments