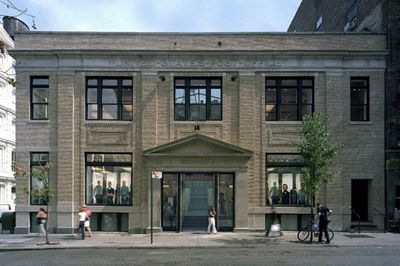 SoHo has grown significantly, gaining sales space for twice as many products, a new theater with extra seating for special events and workshops, NYC's first business-focused Briefing Room, and a much larger Genius Bar.

The store, located at 103 Prince Street, will reopen Saturday, July 14th at 9AM. The first 3,000 visitors will receive commemorative t-shirts.

I wouldn't have looked at the article if the title wasn't misleading.

Protip : There is more to the world than America.


The fact that the title didn't mention New York doesn't make it misleading, because New York does in fact contain the store to which the article refers. And while you might prefer that the title provide additional information, it does contain a fairly obvious clue -- the "H" in "SoHo" is capitalized. That capitalization is obligatory when referring to the New York neighborhood and discouraged when referring to the London neighborhood. In addition, this site previously has reported on the Temporary closing of the SoHo Apple Store, so a reference to the "reopening" provides an additional clue to regular MacRumors readers.

Can this news article be changed to specify that it is Soho, New York, USA.

I assumed it was Soho, London

SoHo has grown significantly, gaining sales space for twice as many products, a new theater with extra seating for special events and workshops, NYC's first business-focused Briefing Room (http://www.macstories.net/news/inside-an-apple-stores-briefing-room/), and a much larger Genius Bar.

The store, located at 103 Prince Street, will reopen Saturday, July 14th at 9AM. The first 3,000 visitors will receive commemorative t-shirts.

Hmmm nothing. It isn't in the title of the article or the thread.


so are you too illiterate to read the article?
Score: 2 Votes (Like | Disagree)

I assumed it was Soho, London
Score: 2 Votes (Like | Disagree)

Can this news article be changed to specify that it is Soho, New York, USA.

I assumed it was Soho, London


oh yeah-- totally! I remember when the Grand Central store opened and I completely thought they were talking about Grand Central in Munich Germany!!!

Hmmm nothing. It isn't in the title of the article or the thread.

OK. So you missed the 2 New York references. Please tell me where a "United States Post Office" exists in London.
Score: 1 Votes (Like | Disagree)
Read All Comments