Amazon today announced the launch of its new "GameCircle" feature for the Kindle Fire tablet, a set of tools similar to Apple's Game Center that will allow users to chart achievements, compete with others via leaderboards, and sync game progress across devices via the cloud.

GameCircle will make achievements, leaderboards and sync APIs accessible, simple and quick for you to integrate, and will give gamers a more seamless and entertaining in-game experience. 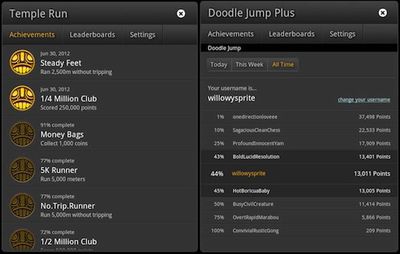 Amazon's GameCircle appears to lack the social aspects in Game Center such as specifying groups of friends and initiating head-to-head gameplay, but its core features are otherwise very similar to what is offered in Game Center while folding in cross-device syncing that some iOS developers have embraced via iCloud.


Meanwhile, MarketWatch provides a bit more color on Amazon's rumored smartphone project, noting that the company is currently testing prototypes with displays in the range of four to five inches.

Officials at some of Amazon's parts suppliers, who declined to be named, said the Seattle-based company is testing a smartphone and mass production of the new device may start late this year or early next year. [...]

One person said that the screen of Amazon's smartphone currently being tested measures between four and five inches.

As screen sizes on Android phones have increased to beyond four inches, Apple is also said to be planning a boost for the iPhone's screen that has measured 3.5 inches diagonally since the device's launch in 2007. The next-generation iPhone is said to include a screen of approximately 4 inches, with rumors suggesting that Apple will increase the height of the screen while maintain the current width.

Where do you think GameCenter comes from? Have a look at Steam, Xbox Live, PSN.
Score: 12 Votes (Like | Disagree)

sbrhwkp3
Laughable. Bring it on. I've played with a Kindle Fire before. It's terrible.
Score: 10 Votes (Like | Disagree)

bushido
i wish GameCenter would store game scores in the cloud, so annoying to use a backup if u only want your game scores back

Blakjack
Where's down voting? I want a legitimate excuse for getting rid of down voting.
Score: 8 Votes (Like | Disagree)

I don't know the excuse or reason for it, but I can tell you the advantage: I can say you all stink, Apple products are overpriced copies of others' ideas (well-made, albeit), and that Steve Jobs was SO overrated as a tech-guru or genius or as an innovator, and my ego won't be affected by those downvotes...
:)

Where's down voting? I want a legitimate excuse for getting rid of down voting.


I don't know the excuse or reason for it, but I can tell you the advantage: I can say you all stink, Apple products are overpriced copies of others' ideas (well-made, albeit), and that Steve Jobs was SO overrated as a tech-guru or genius or as an innovator, and my ego won't be affected by those downvotes...
:)
Score: 5 Votes (Like | Disagree)
Read All Comments

Friday August 12, 2022 12:46 pm PDT by Juli Clover
Samsung this week launched its fourth-generation foldable devices, the $1,000 Galaxy Z Flip and the $1,800 Galaxy Z Fold. Though there's no sign of a comparable Apple foldable device on the horizon, rumors suggest prototypes are in the works, so we thought we'd take a look at Samsung's newest smartphones to see what Apple needs to measure up to when a foldable iPhone does come out. Subscribe ...
Read Full Article • 275 comments