Apple's Retail Push into China Still Limited, But Ramping Up

Back in February 2010, Apple's then-retail chief Ron Johnson noted during the company's annual shareholder meeting that it was planning to open up to 25 retail stores in China over the following two years. At the time, Apple operated only a single store in Beijing that had opened in time for the 2008 Summer Olympics held there. 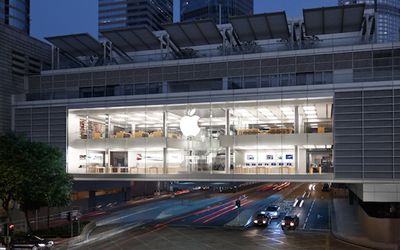 The shortage of retail stores and authorized re-sellers leaves ample room for unlicensed re-sellers to move in. Bad consumer experiences at these unauthorized shops are common and they run the risk of eventually eroding confidence in Apple's products, said David Wolf, chief executive of Beijing-based consultancy Wolf Group Asia.

If Apple doesn't expand its network of stores and authorized re-sellers, it "loses not only near-term sales, it also endangers the sustainability of its success in China," he said.

The report does not pin down the reasons behind Apple's slower-than-planned pace of retail store expansion in China, only suggesting that the company may be running up against bureaucratic hurdles that have complicated its plans.

Apple may, however, be nearly ready for a substantial expansion of its retail footprint in China, as M.I.C. gadget just yesterday posted a summary of six more stores that are currently in the works. Most of the locations have been discussed at one time or another in recent months, but the new summary provides a consolidated picture of what Apple's Chinese customers can expect. The forthcoming locations include:

- Shenzhen: One of Foxconn's major hubs for iOS device production, Shenzhen will see a new Apple retail store going in at the Yitian Plaza shopping mall, according to M.I.C. gadget. The report includes photos of a boarded-up section of the mall where Apple is rumored to be building a two-level store, with an opening predicted for late this year or early next year.

- Chengdu: Apple appears set to open two retail stores in Chengdu, another of Foxconn's manufacturing hubs in China. The first may open as soon as September in the high-end Raffles Square district while the second is said to be a major store opening at the MixC shopping center. That location may open in December.

- Guangzhou: Relatively few details on this location are known, but according to the report Apple is preparing to open a store in the Grand City Plaza district. Major renovations for the area have, however, yet to take place.

- Dalian: As we previously covered, Apple is said to be planning its world's largest retail store for Dalian in northeastern China. No details on an opening are yet known, but previous information suggested that work was indeed underway on the store.

- Hong Kong: In February 2011, reports claimed that Apple would be opening two retail stores in Hong Kong: a 15,000 square foot location at the IFC Mall by the end of 2011 and a 20,000 square foot location at Hysan Place by the second or third quarter of 2012. The IFC Mall store did open in September 2011, and M.I.C. gadget indicates that Apple should at least come close to meeting its target for the Hysan Place store with a late 2012 or early 2013 opening.

Galatian
Great...when is Berlin - the 3.5 Mio inhabitants counting capital of Germany - finally getting an Apple Store? Why do I have to deal with those idiots at Gravis? Seriously one of their repair guys wanted to tell me that just because my keyboard was broken the entire logic board had to be switched out. His reasoning was, after I wanted that to be explained, that when you hit a key it PHYSICALLY connects to the main board...Needless to say I just ordered a new keyboard (which included an entire upper case on the MacBook Pro by the way and costs you some 250) and installed it myself. We need competent people fast!
Score: 11 Votes (Like | Disagree)

apolloa
Don't care what anyone says, the store in the picture on this article is the coolest Apple have ever made IMO.
Score: 7 Votes (Like | Disagree)

reverie
Most likely the problem is local corruption.
Score: 7 Votes (Like | Disagree)

What's wrong with Pennsylvania? It's huge.


Nothing's wrong with Pennsylvania, just that the both the land mass and the population of Pennsylvania are a teeny tiny fraction of China's. China has 5 times more people than the US, yet one state in the US has more Apple stores than China.

These new stores are all sensible locations, except for Dalian. Shenzhen and Guangzhou are two of the richest cities in the country. Chengdu is clearly the financial hub of western China and is home to an increasing number of multinational corporations. Don't understand Dalian though. I would've thought Chongqing or Tianjin made more sense.
Score: 7 Votes (Like | Disagree)

digitalhen
Not sure how you figure that. It's basically in Central. In a premium mall, 5 minutes walk from the Star Ferry, HK station, Central station (4 train lines). Central is absolutely packed with shops (and shoppers).

The offices on top (and one stop away at Kowloon) are where all the banks and finance are in HK. The mall and the store itself is rammed all weekend.
Score: 5 Votes (Like | Disagree)
Read All Comments