Apple's Data Centers to Be Powered by 100% Renewable Energy

Earlier today, we noted that Apple had received official approval for its 20-megawatt solar farm across the street from its data center in Maiden, North Carolina. But even more significant developments are also occurring today, with Apple posting a new page to the environmental section of its website touting that all of the company's data centers will be powered by 100% renewable energy. 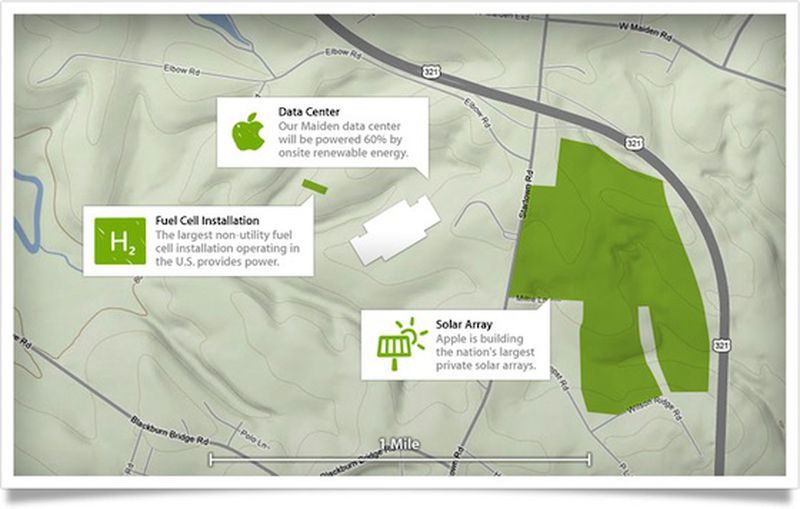 At the North Carolina site, the previously-annnounced 20-megawatt solar farm is being joined by a second farm of equal size a few miles away. Combined with the 5-megawatt fuel cell facility also being built at the data center, 60% of the data center's power needs will be generated on site. The remaining 40% will be purchased through agreements with outside renewable power producers.

We’re currently building two solar array installations in and around Maiden. These sites use high-efficiency solar cells and an advanced solar tracking system. A 100-acre, 20-megawatt installation on the same site as our data center will produce 42 million kilowatt-hours (kWh) of energy annually. A 100-acre site located a few miles away will produce another 42 million kWh. Together that’s 84 million kWh of clean, renewable energy supplied annually. When our bio-gas-powered 5-megawatt fuel cell installation comes online later this year, it will provide more than 40 million kWh of renewable energy annually. This means Apple will be producing enough onsite renewable energy — 124 million kWh — to power the equivalent of 10,874 homes.

Greenpeace last month bashed Apple using estimates it claimed showed that only 10% of the North Carolina data center's power would be from renewable sources. Apple rebutted those claims, noting that at least 60% of the center's energy would be from renewable sources. With today's announcements, Apple has expanded its efforts even further to power all of its data centers with 100% renewable energy.

Only companies with more money than common sense can do this type of thing. It will never have a pay off and will likely consume more energy in it's fabrication and manufacture than it ever produces.

Never have a pay off?

Quit thinking in the short term. The pay off is the influence it will have on other big companies. The payoff is the mother****ing environment, the goddman earth. Jesus H. Christ, people. The fabrication will eventually be powered with renewable energy. Eventually it will ALL be renewable energy but we have to take the first steps somewhere.

That's part of the problem with our species. "We created jobs with oil fields! Now they want to take them away and take away jobs from Americans!" This kind of short term thinking, about who gets paid when and where with no concern for the environment and pollution is part of the reason almost all our modern conveniences will come back to kill us in the end. Keep poisoning the air, soil and sea just so that you can get another paycheck, but one day we'll be in a full-on crisis mode and nobody will want to admit they contributed to this mess.
Score: 32 Votes (Like | Disagree)

bernuli
We're sorry, your iCloud is currently unavailable. ... Because its cloudy.
Score: 26 Votes (Like | Disagree)

shinobi-81
This is outstanding, and I do sincerely hope that more corporations will follow.
Score: 15 Votes (Like | Disagree)

HarryKeogh
This is a lot of trouble to go through just to make sure my reminder to buy cat food is synced across my devices.
Score: 14 Votes (Like | Disagree)

Why would you suspect I'm joking? This wanton spending does nothing for Apple's consumers, and it does nothing for Apple shareholders. It's really just a sign that management is concerned with spending their time and corporate money on their own self-absorbed bourgeois fantasies, instead of, you know, making insanely great products.

They could have added a bottle opener to my iPhone and it would have been a more useful feature upgrade than this.

I sold my shares. Now I understand why Forstall and Mansfield did to. Apple needs to fire their board of directors and replace it with people who have a clue, since obviously Steve Jobs isn't there to babysit them anymore.


How much does this save them in terms of PR costs? Not to mention the panels will in time pay for themselves and add value to the land. I fail to see how this is anything other than a calculated business move and a good investment when interest/bond rates are at an all time low.
Score: 13 Votes (Like | Disagree)
Read All Comments

SwitchArcade Round-Up: ‘Trails of Cold Steel IV’ Coming to Switch, ‘Junk Jack’ and Today’s Other New Releases, the Latest Sales, and More
Interactive Visual Novel ‘If Found…’ From Dreamfeel and Annapurna Interactive Has a Confirmed Release Date for iOS and PC
‘Door Kickers: Action Squad’ from KillHouse Games Is Now Available on iOS as a Premium Release
Raise and Battle Monsters in Chariots Gaming’s Upcoming Simulator ‘Becoming Bytes™’
‘GWENT: The Witcher Card Game’ Update 6.1 Is Now Available Bringing 6 New Leader Abilities, a New Progression System, New Rewards, and More
‘Kingdom Two Crowns’ from Raw Fury Has a Confirmed Release Date for iOS with Pre-Orders Now Live
Bullet Hell Shmup ‘Bullet Hell Monday Finale’ From Masayuki Ito Releases This Month on iOS and Android
The “Priest” and “Ghoul” DLCs for ‘Cultist Simulator’ Are Out Now and the Base Game Is Discounted to Celebrate the DLC Launch for a Limited Time