Spotify has updated its Mac app to version 0.8.3, bringing Pandora-like playlist-based radio stations to the music service. Users can start a new radio channel from any playlist or album in order to listen to similar songs. 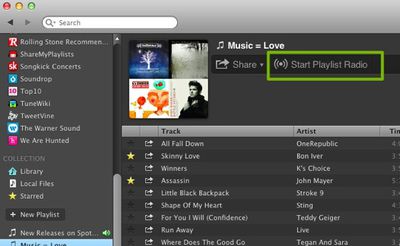 Hasn't this been available for some time now?
Score: 4 Votes (Like | Disagree)

Hasn't this been available for some time now?

southyde4eva
That's what I was just about to ask...
Score: 3 Votes (Like | Disagree)

Dr McKay
Thats been around for ages...
Score: 2 Votes (Like | Disagree)

I haven't used Spotify so far.

I am already listening on Pandora.

What would Spotify have to better Pandora?


I haven't used Pandora in a long time, but if it's anything like it used to be, it's hardly comparable to Spotify.

Here's how to think of Spotify:
Think of iTunes without all the bloat. It just plays music. The store is gone. Syncing is gone. Video is gone. As a result, the app starts up vastly quicker than iTunes. Now imagine that iTunes had every song ever recorded in history in its library. Legally. You may click on any song or album or artist, and it will instantly start playing them. They're streamed, so they don't take up space on your hard drive (not quite true... Spotify tries to buffer itself by downloading the next ten minutes worth of audio whenever it can. As a result, it'll keep on playing if you have a lousy Internet connection that goes out for a few minutes at a time.)

So what's the catch? It's ad supported. They have three types of ads:
1 - banner ads
2 - full window ads (they block Spotify, nothing else. Click the X and they go away.)
3 - audio ads. For every 15 minutes of music you listen to, it'll play a minute's worth of audio ads. Like what you would hear on the radio.


That makes sense.
Score: 1 Votes (Like | Disagree)
Read All Comments