With the introduction of its new ENVY Spectre XT Ultrabook today, HP is finding itself defending the lightweight notebook's design as observers have raised comparisons to Apple's MacBook Air. The issue was addressed directly in a Q&A session with HP design executive Stacy Wolff, with Engadget reporting on Wolff's response to a question speculating that Apple might try to sue over the design. Wolff argued:

I would go back to the TC1000 [Tablet PC] from about 10 years, and that's a tablet. I think if you look at the new Spectre XT, there are similarities in a way, not due to Apple but due to the way technologies developed. Apple may like to think that they own silver, but they don't. In no way did HP try to mimic Apple. In life there are a lot of similarities. 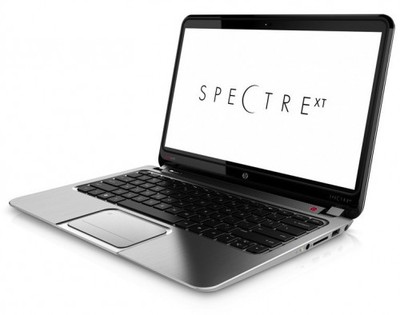 Engadget followed up with Wolff after the session, and he offered some more thoughts on how there are only so many solutions to a given design problem and how HP's design differs from Apple's.

The thing is that you have to design what's right, and that is that sometimes the wedge is the right solution, silver is the right solution. I see a lot of differences as much as the similarities. I think anybody that's close enough to the business sees that there are differences in the design. Ours is rubber-coated at the bottom. We use magnesium; they didn't do that -- they use CNC aluminum. We did a brush pattern on our product; they didn't. We did a different kind of keyboard execution. We did audio as a component; they didn't. So there are a lot of things I can list off that are differences; but if you want to look at a macro level, there are a lot of similarities to everything in the market that's an Ultrabook today. It is not because those guys did it first; it's just that's where the form factor is leading it.

Wolff goes on to cite the "form follows function" argument in claiming that there are only so many ways internal components can fit into a notebook and that the wedge shape is a natural result of how those physical constraints manifest themselves in a usable product design.

Responding to comments about the black "chiclet" keyboard on silver body being similar to Apple's implementation, Wolff notes that a simple color choice doesn't amount to copying and that HP's work with chiclet-style keyboards dates back to the mid-1980s.

HP is far from the first ultrabook manufacturer to be the subject of questions about potentially copying Apple's MacBook Air. Most notably, ASUS was one of the first company's to show off an ultrabook design in the middle of last year, with that design bearing an even more remarkable similarity to the MacBook Air. PC manufacturers have been rushing to bring ultrabooks to the market, now taking advantage of Intel's new Ivy Bridge processors in an effort to take on the MacBook Air in what is predicted to be the future of notebook computing.

RoboCop001
The Spectre in particular isn't a complete ripoff, I've seen much worse. I don't remember if it's from HP or not, but it was so blatant. I think it was the ASUS?

The Spectre is different enough, I'd say. I don't think they copied much, if anything. Similar yes, copy... not really.

Aside from not being really into the aesthetic choices, it's not (too) ugly. I'd say good job HP.

I hope the Beats fad wears off soon.
Score: 44 Votes (Like | Disagree)

jmoore5196
If Steve Jobs taught us anything, it's that the future belongs to the innovators. Whether HP deliberately "copied" anything isn't the issue; their design doesn't bring much innovation to the table.

"Similarities" are seldom accidental. Had HP's design been genuinely innovative, it would have been on the market long ago. It wasn't. The reason is pretty simple: HP still leads by the bottom line. Apple leads with passion that isn't managed by the board or otherwise forced to conform to economic constraints.
Score: 34 Votes (Like | Disagree)

there are only so many solutions


It seems that Apple are good at finding solutions that have not been used before. Others not so much.
Score: 31 Votes (Like | Disagree)

Mac21ND
It's certainly different enough. It even uses two traditional hinges for the screen (very PC) - unlike the large clamshell that Apple uses for every laptop.
Score: 16 Votes (Like | Disagree)

Sorry, but justifying using the same design as the MBA by saying it is "due to the way technologies developed" just doesn't cut it. I bet if it had not been for the Air, this HP machine and many other ultrabooks would not have a wedge shaped design.


Apple weren't the first to use a thin, wedge shaped design. This Sony Vaio was available 4 years before the first MacBook Air was released. Also note the chiclet keyboard. ;)

Oh, heck. My Spectravideo SV-318 had a chiclet keyboard and a wedge design back in 1983.