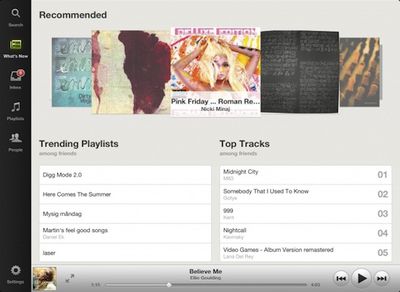 Streaming music service Spotify, which gained a loyal following in Europe before debuting in the United States last July, has launched its highly-anticipated iPad app. The app arrives in the form of a universal version of Spotify's free existing app, although like the iPhone version a Premium subscription is required for mobile access after a brief trial period.

Today we’re extremely proud to present our native iPad app in all its green-hued glory. Features include:


Spotify Premium is available through the app as a free 48-hour trial, with users able to extend the trial to 30 days by signing up through Spotify's website. Continued Premium service is priced at $9.99 per month.
Related Roundup: iPad
Tag: Spotify
Buyer's Guide: iPad (Caution)
Related Forum: iPad
[ 159 comments ]

Or you could spend $9.99 on an album of an artist you like and add it to your collection permanently.


Or you could spend $10 a month and have access to their entire library, find songs, note them, and THEN go buy the album if you like enough of them.

HOW DARE THESE PEOPLE ALLOW US TO HAVE MORE OPTIONS! Their model is dumb and they should feel bad, competition is awful, only iTunes should be allowed to exist!
Score: 17 Votes (Like | Disagree)

As long as Spotify requires a Facebook account to work, they can go **** themselves. Not getting a FB for some lousy music rental service.

It doesn't require one to work, it works perfectly well without one.

However if you have one, you can use it to sign up more easily and share playlists & tracks with friends if you want. This can easily be switched off if you're not interested though.

MXSkier62
have to say that ad was fantastic. actually got a smile out of me with the "just press 2x... just kidding!"
Score: 16 Votes (Like | Disagree)

Porchland
Given that the record labels have demonstrated a willingness to make their content available this way, I'm surprised Apple still has not made a subscription option available -- all you can eat on every device for $9.99 a month.

Same with movies and TV shows.
Score: 13 Votes (Like | Disagree)

Or you could spend $9.99 on an album of an artist you like and add it to your collection permanently.

Spotify costs that per month for unlimited music. It's a no-brainer. How is owning ONE CD worth it?
Score: 13 Votes (Like | Disagree)

why rent, when you can own

spotify is just a slightly better version of Rhapsody

the best thing about my iTunes library is that I'm not interrupted by advertisements every other time I click on a song...


Well, if you get the unlimited or premium version you won't get ads, and you'll get to listen to as much music as your hear yearns for.
Score: 12 Votes (Like | Disagree)
Read All Comments