51% of US Households Own An Apple Product

A new survey commissioned by CNBC is as good a reason as any of why Apple's stock price has been on such a tear in recent years. More than half of all US homes own an Apple product, according to CNBC's All-America Economic survey -- and 1 in 10 homes that don't own any Apple products plan to purchase one in the next year. 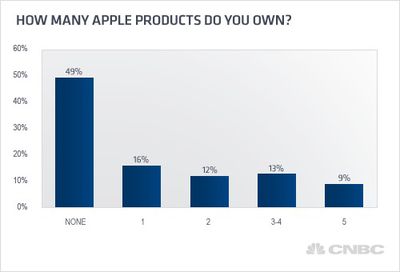 “It's a fantastic business model — the more of our products you own, the more likely you are to buy more,” says Jay Campbell, a vice president of Hart Research Associates, which conducts the CNBC survey along with Bill McInturff. “Planned obsolescence has always been a part of the technology industries sales model, but Apple has taken it to a whole new level.”

Among other findings in the survey:

- 61% of households with children own an Apple product, versus 48% in those without kids.

- The average home in the South owns 1.2 Apple products, the smallest in any region. The average household in the country owns 1.6 devices.

CNBC noted that "the poll of 836 Americans was conducted by landline and cellphone from March 19 to 22 and has a margin of error of plus or minus 3.4 percent."

Dr. Echsel
I wonder how many people answered "no", but didn't realize that their kid's iPod is an Apple product . . . :confused:
Score: 55 Votes (Like | Disagree)

KnightWRX
Kinda surprising. I would've thought that with the iPod's domination of the MP3 player market, the number would be quite higher.
Score: 19 Votes (Like | Disagree)

coltman75
I think this may be party because Apple rewards users for buying further into the eco system. The more apple products you own, the more seamless the experience is. This seems to drive some people to buy more.

In my home, there is an iMac, a MacBook Pro, AirPort express, two iPod touches, three iPhones, an iPad, two iPod Nanos and an iPod classic. Accumulated over 6 years between 5 people, of course.
Score: 19 Votes (Like | Disagree)

basesloaded190
I do think there is a halo effect with Apple products. I got my first mac 6 years ago and liked it so much thought to try out the iphone, the ipod touch, Apple TV, and get another MBP.
Score: 17 Votes (Like | Disagree)

Ray Brady
Does my Newton count?

What about my other Newton?
Score: 12 Votes (Like | Disagree)

I do think there is a halo effect with Apple products. I got my first mac 6 years ago and liked it so much thought to try out the iphone, the ipod touch, Apple TV, and get another MBP.


That sounds like my story too. Got a MBP as my first ever Apple product. Then the iPhone, 2 iMac's and now iPad. :)
Score: 9 Votes (Like | Disagree)
Read All Comments

Tuesday September 27, 2022 8:05 am PDT by Hartley Charlton
An Apple Watch Ultra user has modified their new device's casing to add a brushed finish and remove the orange color of the Action Button in an effort to make it more visually appealing. The Apple Watch Ultra offers the first complete redesign of the Apple Watch since the product line's announcement in 2014, and while the design has been met with praise from many users, some have criticized...
Read Full Article • 169 comments